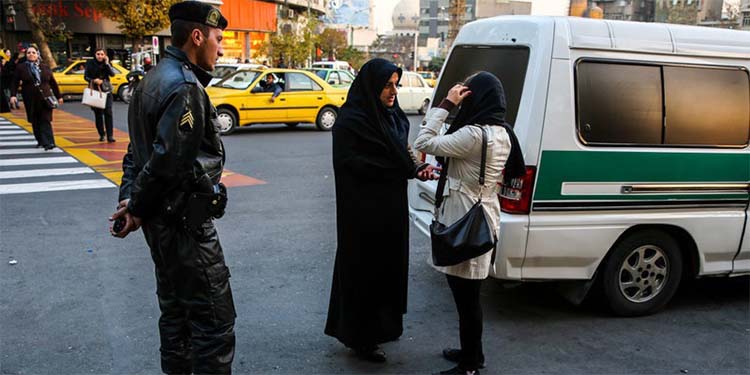 As the Iranian regime continues to intensify its intrusion in the lifestyle of Iranians, various officials have announced the prosecution of some citizens who had taken part in Instagram live streams, the establishment of “undercover patrols” in offices and other public areas, and an overall increase in prohibitions not only for women but also for men.

According to a July 3 report by Iran’s Police News Base website, a senior police commander announced the intensification of an “intelligence” plan “to identify and deal with” what he called “immoral” and “criminal” live streams on Instagram.

Ramin Pashaei, the Deputy Social and Cultural Officer of the Iranian Cyber Police called these people “morally corrupt” adding that “intelligent systems are investigating and analyzing” these cases and that “100 special task forces” were active in dealing with “this criminal process”. He said that some people take part in “immoral” live streams in private sport centers “especially in swimming pools” and “while the criminals will be identified and arrested, legal action will be taken against the owners of the offending sport centers”.

According to another report by the state-run ISNA News Agency, a new plan dubbed the 21 Tir Base will monitor what it called “chastity” in the northeastern city of Mashhad. According to the plan, this entails “chastity in how one looks (at other people), chastity in speech, movement, socializing, and in attire”. The new plan will make sure that women’s hijab adheres to the Islamic Republic’s strict dress code including the specifics of her “chador, veil, manteau, pants, socks, shoes and the color of her attire”.  Men are banned from wearing “ties, bow ties, and other western symbols, t-shirts, tight and short shirts, body-hugging and patched clothes, gold and other Jewelry, and ripped jeans” among other things.

This plan also bans men and women from using “unauthorized and non-Islamic photos” in their profile pictures.  Women must not be hired to work in places used explicitly by men and vice versa while male and female managers must employ secretaries or office managers with the same gender as themselves.

According to Mehdi Rezaei, the secretary of Khorasan Razavi’s Department of Enjoining Good and Forbidding Wrong, “108 three-person teams” in the form of “undercover patrols” will check and monitor “health clinics, pharmacies, offices, organizations, and banks” during office hours in various places in Mashhad. If the regime’s criteria for moral behavior “is not observed by the staff or others” the patrols record the incidents and “send it in the form of a confidential letter to the head of the department”.

Restricting women and interfering with people’s clothing and lifestyle is not limited to Mashhad.  The spokesperson of the Headquarters for Enjoining Good and Forbidding Wrong recently announced that if women with “improper hijabs” are seen in a bank, the branch manager must be held accountable.

Before this, Ehsanollah Kafshdar Tousi, a researcher at the Mashhad seminary told the state-run IRNA News Agency that the society needed “clarification on the issues of virtual space” and emphasized that he was “compiling a practical treatise on cyberspace based on the opinions of jurists.”

The cleric said the intrusion of “jurisprudence into the virtual space should have happened a decade ago.”

“For example, it should be clarified how the buying and selling of Clash of Clans should take place on websites,” he added.