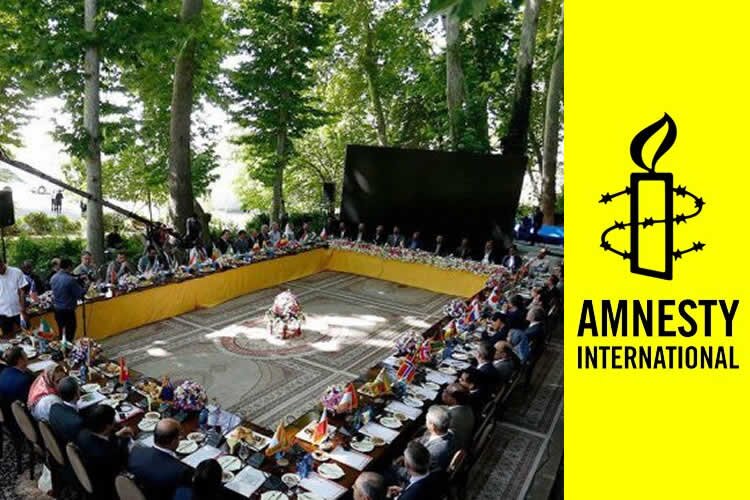 Last week the Iranian authorities arranged a rare visit to one of the country’s most infamous prisons for representatives of up to 45 foreign diplomatic missions from Europe, Asia, Africa and South America.

The authorities made no secret of the fact that the tour of Evin Prison in Tehran was designed to counter negative human rights reports about the prison, and showcase the “excellent facilities” on offer which include an in-house beauty salon, gym, library and restaurant.

In the days that followed, state media outlets were flooded with news stories praising conditions at the prison including congratulatory comments from Indian, Indonesian, Portuguese and South Korean delegates.

In reality, this rosy picture could not be further from the truth.

Research by Amnesty International and other human rights organizations over the years points to inhumane and unsanitary conditions at Evin Prison. Chronic overcrowding, severely limited hot water, poor ventilation, and infestations of cockroaches and mice, particularly near kitchen areas, are among the most common complaints.

Research by Amnesty International and other human rights organizations over the years points to inhumane and unsanitary conditions at Evin Prison.

Prisoners have described being forced to sleep on the floor, including during cold winter months due to a shortage of beds and being fed “barely edible” meals.  Prisoners who are lucky enough to afford to do so can purchase food at their own expense from the prison shop.

Evin Prison is a vast complex that consists of multiple buildings, generally up to three floors high with two sections on each floor. Conditions across the prison sections vary greatly.

The much raved about beauty salon, gym, library and restaurant are only accessible to prisoners held in building 7.

Unsurprisingly many areas of the prison remained off limits to the foreign delegates. They were only granted access to a handful of sections in buildings 4 and 7, mostly housing wealthier prisoners convicted of financial crimes. In these areas, prisoners have used their own funds to boost conditions, buying carpets, curtains, televisions, air conditioning units, kitchenware and other furnishings.

Amnesty International learned that ahead of the visit the authorities transferred some prisoners from these sections to other areas in order to alleviate overcrowding and painted walls. They also warned prisoners against approaching the diplomats and expressing any criticism.

In Iran and around the world, Evin prison is symbolic of Iran’s rampant political repression. It has held hundreds of peaceful activists, journalists, intellectuals and human rights lawyers throughout its disgraceful history.

Yet foreign delegates were not allowed to visit areas of the prison that hold dozens of prisoners of conscience including human rights activists. These include building 350, which holds prominent human rights lawyer Abdolfattah

The delegation was also barred from accessing areas controlled by the Ministry of Intelligence and Revolutionary Guards, where detainees are routinely subjected to torture and other ill-treatment.

They were also unable to meet dual nationals held in the prison on spurious charges including British-Iranian nationals Nazanin Zaghari-Ratcliff and Kamal Foroughi as well as the Iranian-born Swedish resident Dr Ahmadreza Djalali who was transferred to solitary confinement for the entire duration of the visit.

The highly publicized visit to Evin prison was clearly a PR stunt orchestrated by the Iranian authorities to cover up the dark truth about the prison.

Speaking after the visit, Kazem Gharibabadi of Iran’s High Council of Human Rights  made the ludicrous claim that prisoners in Iran enjoy “perfect access to medical care”. This stands in stark contrast to the findings of an Amnesty International report, which highlighted how political prisoners are deliberately denied access to adequate medical care as further punishment.

He also claimed that the conditions at Evin are typical of the high standards of prisons across the country.

Such false claims by the Iranian authorities are an affront to the hundreds of prisoners over the years who have suffered behind bars at Evin prison.

The foreign delegates who took part in this tour may not have known in advance that they would be getting such a limited, distorted view of conditions in this notorious prison. But it should be very clear to them now that they are

being used by Iranian authorities to validate their crude propaganda. They must speak out against torture and other ill-treatment of prisoners in Iran and the arbitrary detention of peaceful critics and human rights defenders and demand that the authorities open Evin and other prisons to independent monitors.

If the Iranian authorities are truly interested in improving their reputation, they must urgently address overcrowding, and ensure access to adequate food, water, medical care, hygiene and bedding for all prisoners. They should also end the use of torture and other ill-treatment, treat detainees with dignity and humanity, release unjustly imprisoned peaceful dissidents, and allow international monitors, including the UN Special Rapporteur on the situation of human rights in Iran, to conduct independent, unannounced inspections of Evin and other prisons in line with international standards.

Only through such steps and can Iran truly establish confidence in the country’s prison system.

House of family razed; members of family beaten for not having property documents