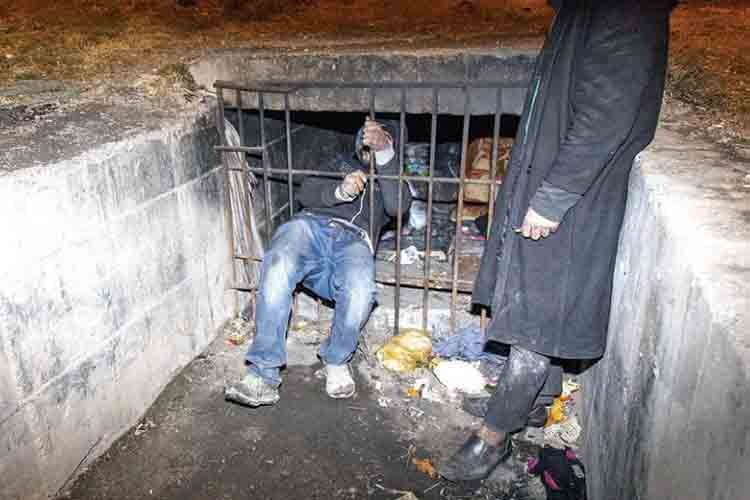 Shahrvand Daily that covered the news on grave dwellers last year in Iran’s capital has now published the images in a recent report on sewage canal dwellers in Tehran.

The narrow, dark, and cold sewage canals in Tehran highways have turned into a sanctuary for a group of homeless people and drug addicts.

The canals are located on the highways in northern Tehran, which is an affluent region. They are described as being “putrid, filled with rats, roaches, lizards and ants”.

The sewage canals are filled with people who are reportedly in deteriorating health. Some of them have lung disease and some have internal infections like kidney infections. One of the canal inhabitants showed our reporter a deep gash from the lashes he had received in the plan to collect addicts from the streets.

According to Hamid, they were previously in a green area near the canals but took sanctuary here after they were attacked by agents. The same agents that attacked these homeless people in the canals once again.

“Some people come and say they want to help us. An hour later, a battalion suddenly comes here to collect us. I swear to you that just a few days ago, agents attacked us. Look at my leg”, he says, showing the lash wound on his leg.

The report is a rare glimpse into the lives of homeless people in the Iranian capital.

Last year another report on homeless people occupying in empty graves in the town of Shahriar, deeply shocked the public.

This is the face of today’s Iran. Poverty has worsened in recent years. The official unemployment rate has risen to 12.7 percent from 10.6 percent in 2014, while joblessness among teens and young adults has reached 27 percent.