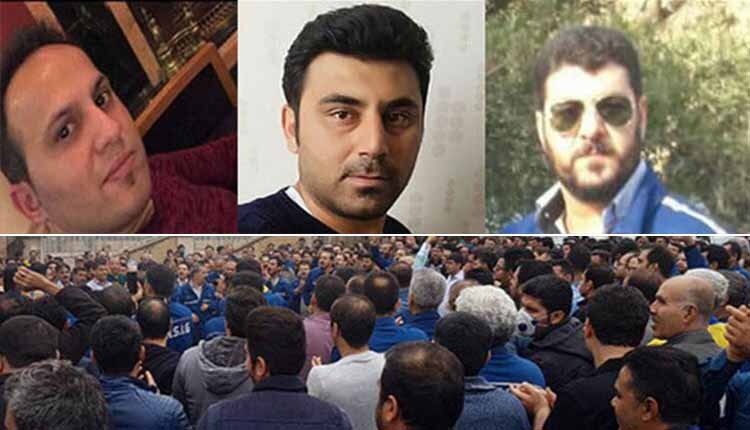 Following days of constant rallies, The Free Trade Union of Workers of Iran announced more 10 protesting Ahwaz National Steel Group employees have been arrested as security forces launch raids on their homes, reports indicate.
According to the workers’ organization, these workers were arrested on Thursday night March 1 after the security forces attacked their homes. The arrest order was issued by the regime’s Attorney General’s Office in Ahwaz.
Those arrested include Farhad Akbarian, Morteza Akbarian, Meysam Ali Ghanavati, Amin Momenpour, Hossein Nisi, Baqer Delphi, Taghi Hassanzadeh, Hadi Afravi and Mehdi Adelzadeh, according to the report.
Meanwhile, Ahwaz police intelligence has been in contact with many workers of the National Iranian Steel Industrial Group asking them to announce their home addresses.
The Free Trade Union of Iranian Workers said “the overnight arrest of more than 10 workers from this large industrial complex in Ahwaz, in a situation where they have not been paid for months and their families are in a tragically disastrous living situation shows that the government that took possession of this society 40 years ago with the ‘gesture of safeguarding the poor’, and now with night raids on the workers’ homes… they are resorting to beating, execution and torture and trying to force us to work for them with hungry stomach.”
This guild organization condemned the detention of a number of the National Steel Industrial workers and demanded their immediate and unconditional release.
There has been a confrontation with protest workers in Iran including the judiciary in Khuzestan province which in response to the strikes of the workers of Imam Port in this province threatened them to be summoning and trial in courts last year. At the same time, 17 laid-off workers of the Aq Dareh gold mine in western Azerbaijan province were sentenced to lashes and the verdict was later implemented.
Meanwhile, with the ongoing labor protests in Iran, the website of the Islamic Republic’s leader, on March 7, published Khamenei’s speech on February 5, in which “enemies” were accused of trying to create stagnation and lameness among the workers to slow down the work or make the workers do so”.
Iran’s security forces blocked the presence of more than 300 workers from the National Iranian Steel Industrial Group in the prayer hall in Ahwaz.
According to the Free Trade Union of Workers of Iran, the workers of this industrial complex intended to “complaint” and “seek justice” for the second time in Ahwaz Friday prayer, but “the Basij and security forces prevented their presence” and the workers gathered in front of the prayer hall.
They chanted slogans such as “Friday prayer leader, listen to us: We are the workers not thugs.
They chanted in last week Friday prayers in Ahwaz: “Death to the worker – Peace upon the oppressor”. This sardonic slogan was chanted in protest to the lack of officials’ attention to the demands of the guilds of the workers of the National Iranian Steel Industrial Group, a slogan that was widely reflected on social networks.
Earlier the same sarcastic slogan was chanted by the Hepco factory workers on February 5.
The Free Trade Union of Workers of Iran also wrote that after the rally of workers, one of the police commanders tried to disperse them, but the workers were not willing to leave the area, and after that, motorized police forces arrived in the area.
This is while according to another report released by the Free Trade Union of Iran, the governor of Khuzestan was supposed to go to their gatherings to talk with protesting workers. Meanwhile, according to the state-run IRNA news agency, the Ahwaz Police Chief and a group of Khuzestan Provincial Police Chiefs have promised the workers to follow up on their requests.
In this regard, one of the workers of the National Steel Industrial Group said: “So far, we have referred to many authorities to resolve our problems and we have only heard promises to resolve the issues.”
In the past few days, workers of the National Iranian Steel Industrial Group gathered in front of the governorate of Khuzestan during the strike. They demand payment of at least three months of wage arrears and their benefits and the clarification of how they pay their salary and their end of the year (New Year) rewards. This is where the employer has said that he will pay only one month’s wage. This was the subject of criticism by the workers and they demanded removal of the employer and the governor of Khuzestan.
In recent months, the failure to pay the wages and benefits of workers in various regions of Iran has led to their guild protests.