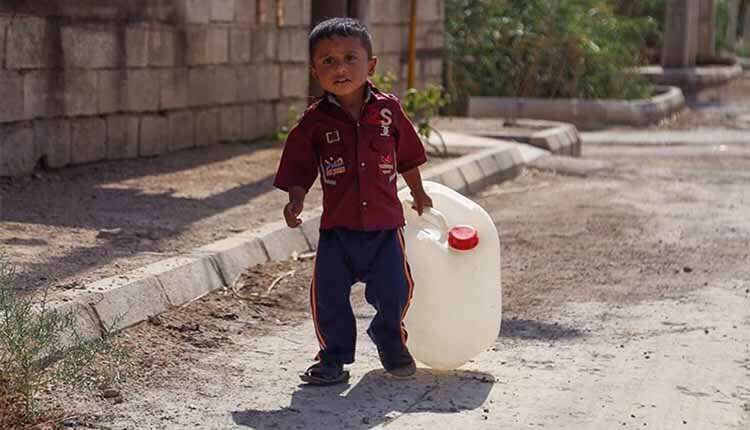 On Wednesday July 11, 2018, a crowd of angry people in Abadan gathered in protest to the lack of drinking water in front of the city’s water administration and the governor’s office. Environmental activists say that the IRGC has been exporting Karun’s water to Basra to consolidate Iran’s regional influence in the Middle Eastern countries.

In many regions of Iran, the people use drinking water with a salinity of 450 to 500 micrometers. But, although 30 percent of Iran’s current and flowing waters pass through Khuzestan province, water salinity in the province’s cities is three times the water standard in other regions of Iran.

According to Mehr state-run News Agency, in the current year, the Karun River is facing 65% of the drought.

The sharp decrease in the water volume of the river has led to the influx of the sea into the river. This has increased the water salinity in the cities of Khorramshahr and Abadan in which the people are protesting today.

Khuzestan’s General Director of Environmental Protection assumed that 6 billion cubic meters of Karun’s plots has been harvested for agricultural and industrial development projects in the upstream provinces. It is planned that in case of their implementation no water will reach Khuzestan.

Ahmad Reza Lahijanzadeh added that by reducing the discharge of the Karun River due to the high harvesting, as well as the discharge of industrial, agricultural, and municipal sewage sludge, the quality and quantity of this river has been jeopardized. (IRNA state-run News Agency- July 10, 2018)

In 2001, the proposal to sell Karun’s water to Iraq and Kuwait was introduced.

Today, the protesters say that the government is exporting Abadan and Khorramshahr’s’ drinking waters to Iraq and Kuwait, which is why the people are facing lack of water.

Yousef Farhadi Babadi, an environmental activist, emphasized and claimed that the follow ups have shown the sale of water to Iraq has actually happened in different periods and seems to be still ongoing. In response to why Iran, in the face of a water crisis, has to sell water to a country like Iraq, he mentioned that there are important issues, such as regional influence, in which the government officials should be honest about and let the people know. He added, that even though, we are confident that Iran has entered into a crude oil trade with Iraq, officials are constantly denying it. He concluded that the farmers and urban people like Izeh City, who live along the dam and have no share of water behind these dams for drinking, have the right to protest to these discriminations. (Salamat News state-run Website- July 10, 2018)

Political prisoner Ali Moezzi not released despite termination of sentence