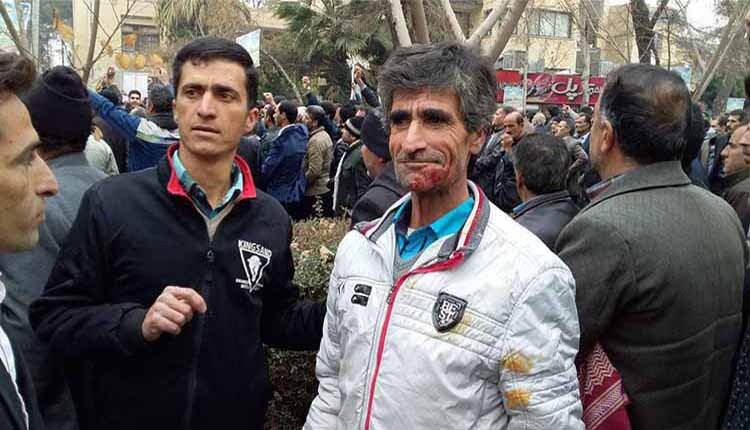 A peaceful gathering of farmers in Isfahan Province turned violent after the state security forces attacked the protesters on January 2, 2018.

A peaceful gathering of farmers in Isfahan Province turned violent after the state security forces attacked the protesters on Wednesday.
Around 2,000 farmers of the Khorasgan district in Isfahan Province, central Iran, rallied on Wednesday, protesting against the government’s failure to address a drought that has plagued the region for more than a decade.

Riot police were dispatched to the area from early Wednesday morning aiming to prevent the expansion of this rally.
Videos from the gathering showed a large number of riot police on the scene with scuffles between police and the farmers.

The state security forces took measures to prevent the farmers’ demonstration and even resorted to shooting bird-shots.

The farmers, who blame the government for water mismanagement and water scarcity which has all but destroyed their farmlands chanted “shame on the deceitful government,” and “a nation has never seen such injustice.”

Ridiculing the regime’s security units the farmers also chanted “Coward, coward” and “Our incompetent government is our disgrace.”

In the past year, the farmers have held demonstrations on several accounts, protesting against what they believe are corrupt and inept officials who have deprived them of their centuries-old water source; mainly water from the river Zayandeh Rud.

On Tuesday, these farmers held simultaneous rallies in the towns of Varzaneh and Khorasgan in Isfahan Province, chanting against the Iranian regime’s theft and plundering.

On Monday, Varzaneh farmers took to the streets, protesting water shortages and the regime’s corruption in managing water sources.

“We will fight, we will die and we will take back our rights,” the farmers chanted. The farmers were also shouting, “Hail to farmers, death to tyrants,” referring to regime officials who have contributed to province’s water problems.

In March, police clashed with farmers, who held a sit-in strike in Varzaneh. Mostafa Benvidi was wounded and lost sight in his left eye during the clashes. Today, he has more than 100 pellet shots in his body.

Earlier that month, Isfahan’s farmers swamped the Friday Prayer venue and turned their backs to the preacher. They shouted, “America is not the enemy – the enemy is right here”.

The Zayandeh Roud river once watered this region, flowing down from the Zagros Mountains, through the city of Isfahan and through a string of farming towns like Varzaneh and its suburbs, home to 30,000 people, some 550 kilometres, south of the capital Tehran.

But it dried up years ago. The fields around Varzaneh are now stretches of desiccated, salt-laced dirt. The cattle are gone.

Around 90 per cent of the farming activities in the district have faded away,according to an environmental activist in Varzaneh.

Government policies have worsened the strain from drought and growing population, Khalili and other experts say. Authorities have increasingly built factories, sucking up large amounts of water.

In July, officials cut ribbon of another phase of a steel mill in Isfahan. Water has also been diverted to other regions.

Many farmers have not cultivated their lands for the past few years.

In early November, the representative of Falavarjan at the Isfahan Islamic Council spoke to ILNA state-run News Agency about some of the impacts that the water shortage was having on the people of Qahdarijan, which was the scene of major clashes and protests during the January unrest.

“The city of Falavarjan has about 270 thousand inhabitants and has three districts and most of the people work in the agricultural sector. I don’t exaggerate when I say that 90% of the people in Qahdarijan are engaged in all sorts of agricultural-related jobs”.

Most of the farmers cultivated onions when Zayanderud was still flowing with water. Until a few years ago, rice and other crops were also cultivated, but those were discontinued as a result of the water shortages.

“Some the people who were once wealthy, are currently so deprived and poverty stricken that they are covered by relief foundations such as the Emdad Foundation,” he said.

“Many of them are retired farmers who have large families and many children and relatives, and have no other source of income,” Hesam Nazari added.

“If this is not a catastrophe then what is it?” the Isfahan official asked in the ILNA interview.