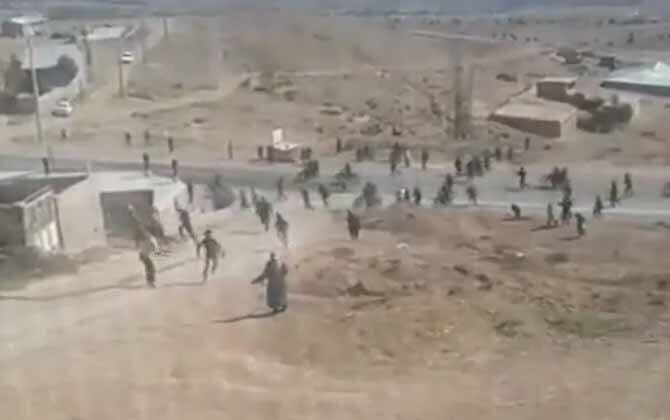 The State Security Force attacked and detained villagers in the Kordmir Village of Chardangeh, protesting a 14 year old landfill in the northern village of Chahardangeh.

Residents of the village located in the city of Sari, Mazandaran Province were violently beaten and detained during Tuesday’s Chahardangeh landfill protests. Local sources said that security forces used tear gas to disperse the angry protesters.

This protest had lasted 17 days until September 24, when the forces of the State Security Force’s Special Unit raided and brutalized the protesters to disperse their crowd. They fired plastic bullets on the protesting women in this village.

According to eyewitnesses, many women were injured or passed out after being beaten by security forces.

“After locals prevented Sari’s waste from being dumped in this region in the past few weeks, and on orders of the prosecutor, security forces were transferred to Chahardangeh and started violently arresting and beating protesters,” an eyewitness said adding that many women were also forcefully arrested.

In the video clips posted in the social media show the scenes after the attack. The women of this village are shown in a small clinic who were wounded in the attack. They stressed that they had been attacked by the Special Unit.

After the protest was suppressed, new trash was dumped in the Chahardangeh landfill.
A videos posted on social media shows the area the regime has dumped trash in the village.
Villagers say the trash has contaminated their water sources and caused respiratory problems for their children.

Trash from the city of Sari has been dumped in the Chahardangeh landfill for the past 14 years. The villagers were initially told that it would only be used for six months.

According to Chahardangeh locals, the waste has seeped into their water sources contaminating their water and has also led to respiratory problems in children.

Iran Executes 11 People Including a Woman in Two Days