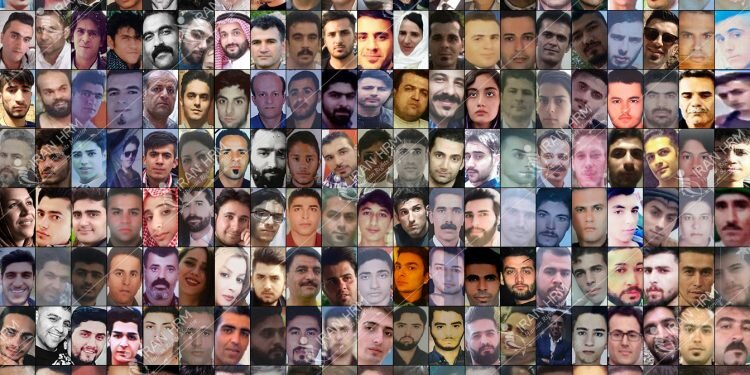 In the last days of November, security forces were swarming the streets in many cities and towns to intimidate people from gathering, fearing a new round of protests.

In some cities the state security forces prevented people from entering the cemeteries.
In a video shared on social media, a police officer is heard saying: “They’ve told us not to allow entrance because of the anniversary of Noveber 2019 protests.”

Families of victims in several cities were forced to hold their ceremonies at home.
In a video posted on social media, mother of fallen protester Farhad Mojadam, says: “They didn’t allow us inside the Beheshte Rezvan Cemetary (in Karaj near Tehran) so I was forced to light a candle for you at home…. My darling, you were innocent, but they killed you.”

In Behbehan, Khuzestan province in southwestern Iran, social media users published posts and called for a ceremony to honor the victims including Mehrdad and Mahmoud Dashtinia, two martyrs of the November 2019 protests.

Behbahan was one of the first cities where security forces used overwhelming force to suppress protests in November 2019.

Mehrdad and Mahmoud were killed by Revolutionary Guards (IRGC) snipers on November 16, 2019. Mahmoud was shot first by sniper units who had been dispatched on rooftops to target protesters. When Mehrdad went to help him, the snipers shot him too, killing both brothers on the same spot.

Iranian regime took new steps to suppress dissent before the first anniversary of the start of the November 2019 protests in the city of Behbahan.
A prosecutor’s office in Behbahan summoned dozens of residents in November to face questioning for alleged national security offenses. The summons gave residents five days to report to the prosecutor’s office or face arrest.

Some of the people summoned to the prosecutor’s office had joined street protest in Behbahan on July 16, 2020.
Some of them were relatives of those killed in Behbahan in November 2019.

In another move aimed at suppressing any commemoration of the crackdown in Behbahan, the police and municipality in Behbahan destroyed the road to the Behesht Rezvan Cemetary in fear that the families of fallen protesters, would gather at their graves on the anniversary of the protests.

Twitter users used the hashtag #كدام_آبان, “Which November?” to commemorate fallen protesters, and to express their outrage over the brutal suppression of the protests.

The hashtag started when the sister of a slain protesters was called by the office of the regime’s Supreme Leader.
“They called my mom’s mobile. She gave the phone to me, and the caller said he was from the Supreme Leader’s office,” Pouran Hashamdar, sister of fallen protester Mohammad Hashamdar said in an interview with Radio Farda.

The man was calling about the Hashamdar family’s complaint over the killing of their son.

“He asked me if I filed a complaint. I said yes. They asked, what is it about? I said, my brother was killed last November (Aban in Persian). He said, which November? I said, the bloody November of 2019. He said we are pursuing your case. And that’s all he said.”
The “Aban” protests are very well known in Iran. The report outraged Iranians who say that the response from Ali Khamenei’s Office showed the regime’s indifference over the brutal killing of at least 1,500 protesters.

Twitter users turned the Office’s response to a hashtag to remind the regime of the atrocities it committed last year.
Photos and footage of fallen protesters and slain children were tweeted and retweeted in their memory.

Tributes to the victims also poured in on social media, with many users writing, “Aban continues”, “They will be never forgotten” or “We will continue their path.”

The government imposed a near-total internet shutdown and embarked on the most brutal crackdown against protesters in decades against protests that began over an abrupt fuel price increase on November 15, 2019 and lasted for a week.
Over 1500 men, women and children were killed during the protests.

Almost a year after the bloody November 2019 protests, many protesters are still detained with heavy prison terms.
The authorities continue to sentence dozens of those arrested to imprisonment and flogging.

On June 24, 2020, Iran’s Supreme Court had upheld the death sentences against three young men arrested after participating in the protests, Amirhossein Moradi, Saeed Tamjidi, and Mohammad Rajabi, on charges of “taking part in destruction and burning, aimed at countering the Islamic Republic of Iran.”