Discriminatory Treatment of the Poor in Iran, Single Mother Self-Immolates 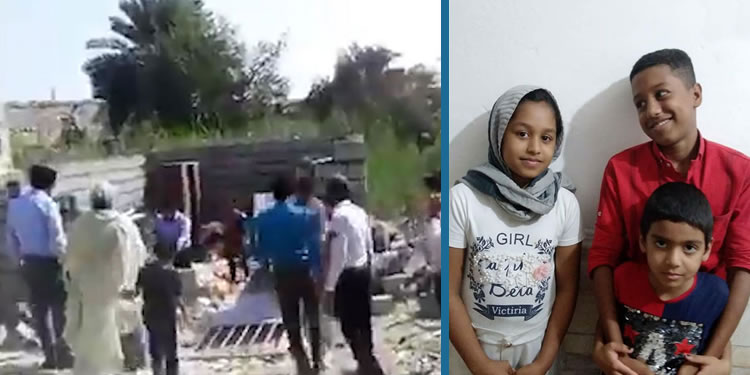 Discriminatory treatment of the poor in Iran, single mother self-immolates

A woman setting herself on fire in Bandar Abbas, capital of the southern Iranian province of Hormozgan, evoked widespread outrage across the country.

The footage of this cruel and inhuman measure was disseminated on the social media on November 19. A young girl can be heard screaming and a woman is seen trying to prevent the agents from demolishing her home.

Tayyebeh, 35, with her three children, and her sister-in-law, Zahra Hassanzadeh, and her 7-year-old son, all lived in a small room built in Sarallah Ave. in Bandar Abbas.

On Thursday, November 19, agents of the municipality of Bandar Abbas went to their place without prior notice and without a court warrant.

The small room built by the two women was so rickety that agents could ruin it just by using their hands to push the walls.

The two women heads of household did not have any other place to live. They had built this ramshackle house to shelter their children.

When the agents were demolishing their house, Zahra started screaming at the agents and begging them not to demolish their home. Tayyebeh’s daughter cried and begged them not to destroy their only shelter. But the agents did not heed them.

This is when Tayyebeh doused herself with kerosene and set herself on fire, suffering substantial burns. Now she is in a hospital undergoing treatment.

Her homeless sister-in-law Zahra is left to take care of her own child and Tayyebeh’s three children.

The state-run hamshahrionline.ir cited Esmail Movahhedi Nejad, deputy for civil services in the Municipality of Bandar Abbas, as saying: “During the razing, she suddenly set herself on fire… She suffered 17 percent burns which is mostly on her left arm.”

Abbas Aminzadeh, the mayor of Bandar Abbas, claimed that “the land had been invaded and according to the law it had to be destroyed” (The state-run ILNA news agency – November 19, 2020)

This latest incident sheds further light on the state officials’ discriminatory treatment of the poor in Iran.

In another case in May, a mother of seven who protested the demolition of her home suffered a fatal heart attack after security forces used pepper spray to attack her in Kermanshah, western Iran. Asieh Panahi was 55 years old and was trying to protect her newly built house.

In recent weeks, too, the clerical regime’s forces destroyed the houses of residents of Zardoui Village of Paveh (Kermanshah Province), Golshahr district of Chabahar (Sistan and Baluchestan Province), Hajiabad village in Hormozgan, and Ismailabad village in Mashhad (Razavi Khorasan Province). In addition to razing the houses, they attacked and brutalized women and youths.

In August, locals tried to prevent the demolition of their homes in Abolfazl village near Ahvaz, southwestern Iran. They were attacked with tear gas and pellet guns.