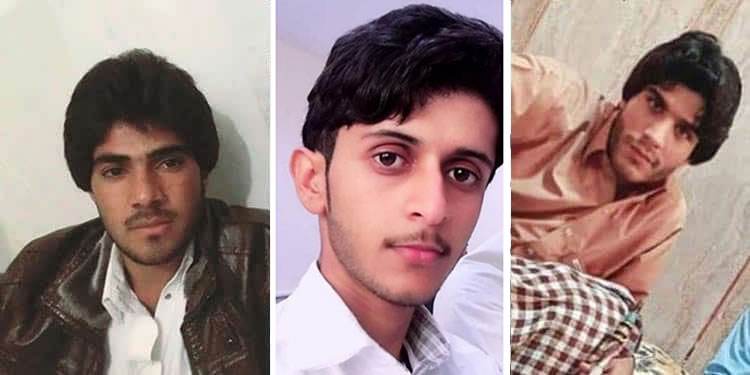 Three fuel carriers were shot and killed by the State Security Force in Sistan and Baluchistan Province, in southeastern Iran.

Shahram Vidadi and Faramarz Baluch Lashari, were shot and killed on Sunday, December 13, 2020, and Saddam Souri Zehi was shot and murdered on Monday, December 14, by the State Security Force as they were carrying fuel by their cars.

On Sunday, December 13, the State Security Force chased a car suspected of smuggling fuel. They opened fire on this car, a Peugeot 405. The driver got wounded and crashed into a Nissan Van which was also carrying fuel. Both drivers lost their lives in this crash.

The Peugeot driver was Shahram Vidadi from Bandaman village near Iranshahr. The driver of the Nissan van was Faramarz Baluch Lashari, from Gask village in the Lashar county.

Shahram’s body was taken to Iranshahr on December 13. The Coroner’s Office examined his body and said he was deliberately murdered. His body was handed over to his family for burial on Monday, December 14.

Shahram Vidadi had recently got married. He had to carry fuel to earn his own and his family’s living.

The report also indicates that Faramarz Baluch Lashari was a high school student who was smuggling fuel to pay for his school and his family’s expenses.

In another development on Monday, December 14, security forces in Routak Khash Station opened fire at  and murdered Saddam Souri Zehi from Shahrak Towhidabad village near Khash.

Saddam Souri Zehi was carrying two jerry cans of gasoline with is motorbike, when the head of the Routak Station shot him in the head. Local people took Saddam to Mir Javeh hospital, but he died on the way due to severe injury.

The Souri Zehi family filed a complaint against agents of the Routak Station, but they denied having shot Saddam.

At least 19 fuel smugglers have been killed by the State Security Force over the past year.

The people of Sistan and Baluchistan are very poor. They have no jobs, so they resort to such difficult jobs to earn a living. Even women help in smuggling fuel.

The Revolutionary Guards and the State Security Force arbitrarily open fire on these fuel carriers and kill them without having to account to any authority.