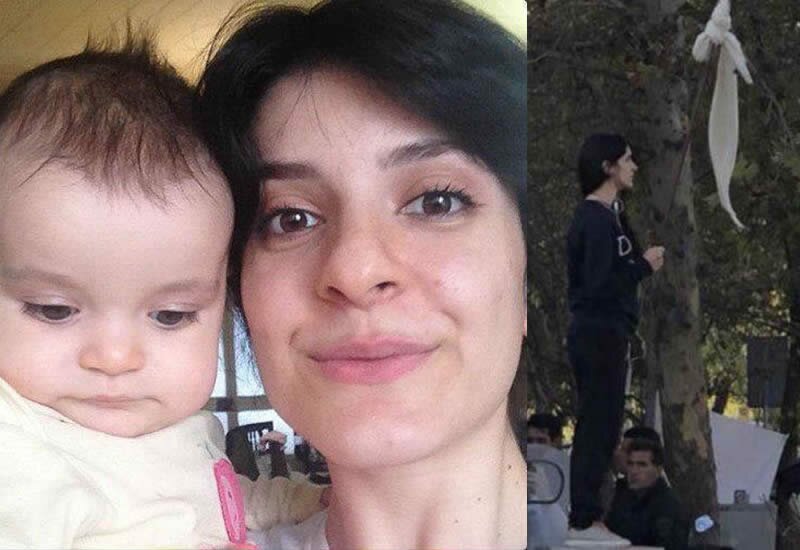 Lawyer and human rights activist Nasrin Sotudeh said that the girl who took off her scarf and stood shaking it on Enghelab Street, known as the “Girl of Enghelab Street” on social media, was arrested once again after she was released from prison.

Sotoudeh reportedly went to Enghelab Street, where the woman carried out her defiant act, to discover more about her whereabouts. She told AFP that the only information she was able to gather was that the woman is 31 years old and has a 19-month-old baby.

Sotoudeh told the AFP that in the past the regime’s authorities have taken women to a holding place before they receive legal representation and beaten them.

“Before even being tried by legal authorities, [women] are taken to a place called ‘Gasht-e Ershad’ [Guidance Patrol], where they can be harshly beaten up,” she said. “Whether a case is opened for them or not is not important. The illegal punishment they have had to bear has always been much more than what is foreseen in the law.”

Girl of Enghelab Street, Vida Movahed who was arrested for removing her headscarf and waving it in the air as a sign of protest to the compulsory hijab law in Iran was first arrested in one of Tehran’s busiest streets on December 27.

The incident took place on the same day that the Iranian regime announced it was relaxing its punishment for women who do not adhere to the strict Islamic dress code. Police reportedly said that women who wear makeup and loosened headscarves will no longer face arrest, but will be sent to “Islamic values” classes.