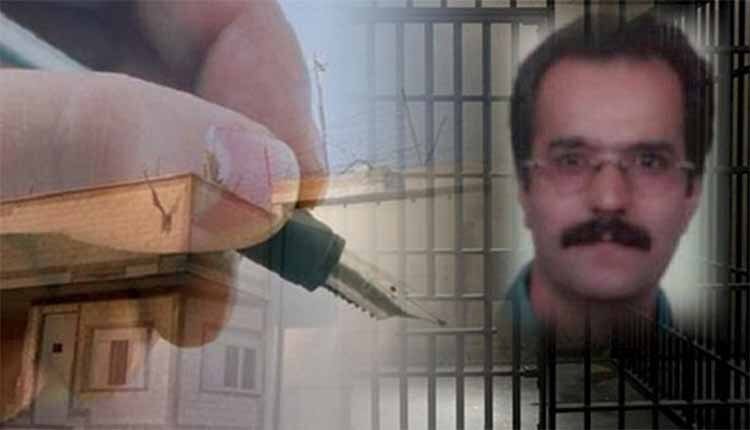 Translated from the original letter

On the occasion of the World Day Against the Death Penalty, a number of families of political prisoners and execution victims issued messages and statements calling for abolition of the death penalty in Iran.

In an open letter that has been secretly sent out of prison, Iranian political prisoner Hassan Sadeghi, who has been held in Iran’s Rajaie Shahr Prison, has revealed details about the execution of political prisoners during 1980s.

Wishing for an Iran without execution

“We are approaching the World Day for the Abolition of the Death Penalty and the executions continue in Iran.

The ruling mullahs have no scruples in resorting to the death penalty as a tool for repression because it is founded on pillars of executions, killing and criminality and from the very first day, it found his survival in this inhuman act.

The regime ironically has worn the execution of so many innocent people as a badge of honor. The execution of innocent children and juveniles like Fatemeh Mesbah and Ezzati Mesbah at the ages of 13 and 15 will not be erased from the record of this regime.” Sadeghi writes.

“I had two uncles, Haj Mohammad Mesbah and Ata Haj Mahmoudian. We were always together.

Fatemeh, Ezzat-o-Sadat, Mahmoud, Asghar and I, were childhood playmates. Our toys were pens, papers and books. Our play was to read and write books like Little Black Fish, or the stories of Qoran, Imam Hussein and Imam Ali. Everyone should tell what he understood so that our fathers gave us scores,” Sadeghi recounts.

“We had never thought that one day what we had learnt from Imam Hussein and Imam Ali (two of the most revered Shiite leaders) would lead to imprisonment of Fatemeh, Ezzat and I, and eventually to the execution of 13-year-old Fatemeh, and 15-year-old Ezzat, even without trial. We had never thought that one day Ezzat-o-Sadat 15, and his brother, Mahmoud 18, would be executed without committing any crime,” Sadeghi writes.

“The regime’s crimes got to a point where it had to conceal them under the banner of supporting the children in Yemen.

Can you tell what you have done to the Iranian children that you are now talking about killing children? What did you do with the youth like Mohammad Mesbah, Teymour Davar, Masoud Khastou and Ali Khademi so now you are talking about the killing of Palestinian youth?

Of course, it is not surprising that if the hangman Pourmohammadi shamelessly says before camera that, “we executed people and it was out right.”

Who gave you the right to execute teenagers like 15-yer old Afshin or the youth like 20-year-old Mostafa Mosana?

I was taken to Ghezelhesar Prison in 1982. Later, I heard that Mahmoud Mesbah, whose leg was broken the time of the farewell, was executed shortly after my departure along with his brother Akbar Mesbah while holding their hands at the last moments.” Sadeghi recounts.

“Less than a year later I was transferred to Evin Prison’s room 30 of Hall 6. Only five people had remained of 30. Ahmad, Jebreil, Teymour, Behrouz, where had they all gone?” Sadeghi asks from the remaining fellow cellmates.

“I got my answer from a sob caught in their throat and their heads down. The regime’s execution machine is still on after 40 years and continues to kill. Just a few weeks ago, they executed Zaniar and Loghman. No matter how many youths are murdered, the ruthless dictators never get satisfied. I hope one day the world makes any relations with the record holder of per capita executions, conditional on an end to the death penalty.