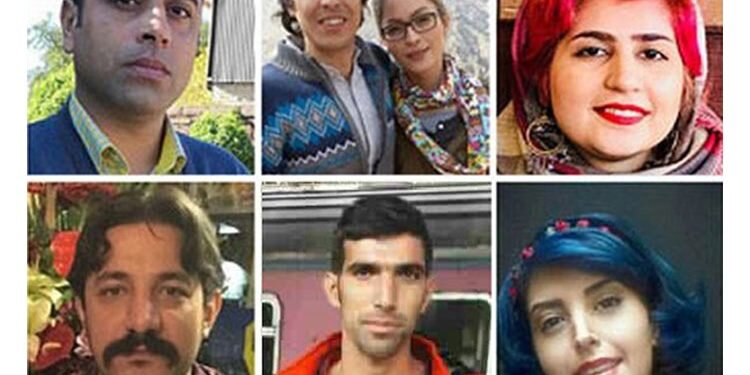 Tehran’s Revolutionary Court sentenced seven labor activists to a total of 117 years in prison and 74 lashes over Haft Tappeh Sugarcane workers’ protests last November in the southwestern city of Shush.

According to the sentence, Ismail Bakhshi was sentenced to 14 years of prison and 74 lashes, while Mohammad Khanifar was sentenced to six years of prison. Bakhshi was charged with “assembly and collusion to act against national security”, “insulting the leader”, “publishing lies”, “spreading propaganda against the state” and “disrupting public order” for which he was sentenced to lashes. Khanifar was charged with “assembly and collusion and spreading propaganda against the state”.

They were charged with “assembly and collusion to act against national security”, “membership in the Gam” (a publication they wrote for), “spreading propaganda against the state”, and “publishing lies”.

On August 3, indictments were read at Branch 28 of the Revolutionary Court against labor activists Esmail Bakhshi, Ali Nejati, and Sepideh Qoliyan, along with journalists Amirhossein Mohammadifar, his wife Sanaz Allahyari, Ali (Amir) Amirgholi, and Asal Mohammadi.

At least 40 Hafteh Tappeh sugar mill company workers have been detained in recent months in connection with protests for unpaid wages at the mill.

Bakhshi and Qoliyan have been imprisoned since January 2019 after both reported that Bakhshi had been tortured while in the custody of the Intelligence Ministry.

On January 6, Esmail Bakhshi addressed Iran’s Intelligence Minister, Mahmoud Alavi, in his Instagram post, demanding to know why he was tortured “to the brink of death”.

He also detailed the use psychological torture against himself and a female civil rights activist and photographer detained along with the workers for taking pictures of their strike, and called the mental torture worse than the physical torture.

Sepideh Qolian was arrested in January 2019, for a second time. In July 2019, she and a number of other inmates were badly beaten and brutalized in Qarchak Prison by dangerous inmates enticed by prison authorities.

Before this, On August 13, seven workers of the Haft Tappeh Sugarcane Factory in the southwestern city of Shush were sentenced to eight months of suspended prison and 30 lashes each.

According to the Haft Tappeh Sugarcane Syndicate, the workers were tried and sentenced by the 102ndBranch of the Shush Criminal Court.

A staff reporter for the independent Gam Telegram app news channel, Sanaz Allahyari has been detained since January 9, 2019, when she was arrested along with her husband Amirhossein Mohammadifard, the news channel’s editor-in-chief.

Allahyari, 33, who has an undergraduate degree in economics, was previously arrested in February 2009 and held for 17 days for being a member of a student organization that campaigned for greater freedoms and gender equality.

Assal Mohammadi, a civil activist and student of pharmacy, was taken to Evin Prison on August 4, 2019. She was arrested on December 4, 2018, and charged in connection with her reports on labor rights protests in Khuzestan Province. She was released on bail on January 5, on a 400-million-toman bail. Ms. Mohammadi was arrested again in August.

Assal Mohammadi had written and published posts in support of the protests by workers of Haft Tappeh Sugar Cane Company and the Steel Workers of Ahvaz.

Iranian Female Football Fan Dies After Setting Herself on Fire