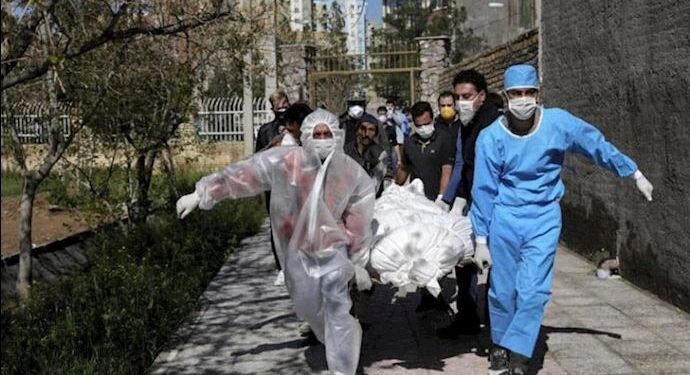 As the coronavirus outbreak ravages around the country taking a higher toll everyday on the people, Iran easing of quarantine guidelines is a bid to project a return to normal conditions to resume the desperately needed economic activities.

According to information collected from sources inside Iran, covid-19 has taken the lives of more than 31,500 people in Iran. Although the regime is playing down the number of victims, announcing a total of 5,031 deaths due to the coronavirus.

Despite numerous warnings by health officials and medical experts, regime president Hassan Rouhani declared that he has ordered the Health Ministry to “examine the conditions of resuming medium-risk business activities” in cooperation with the Security and Social Committee of the Coronavirus Task Force. This means that the government is planning to expose even more people to COVID-19 infection.

Over 31,500 people have died of the novel coronavirus in 294 cities checkered across all of Iran’s 31 provinces. While Iran has officially reported 5,031 deaths from the virus.

Following is a brief review of the scale of the catastrophe narrated by sources inside Iran:

Seventeen Covid-19 patients, including 7 ICU cases, were admitted to Tehran’s Sina Hospital on Wednesday, April 15, 2020 during the evening shift between 5.00 and 7.30 p.m., said one of the hospitals personnel.

The patients with Covid-19 symptoms had referred to the hospital on their own, all of whom tested positive. Their families need to be quarantined but hospital authorities did not take any measures in this regard, and did not even make any recommendations.

The patients returned home with public transportation, something that contributes to the spread of the disease.

In another report from Rasht, capital of Gilan Province in northern Iran, a citizen said: “Some people have posted signs on the walls of their homes announcing deaths of children ranging from 4 to 10 from the coronavirus. This news, however, are not announced anywhere.”

One of the residents of Karaj reported on Wednesday, April 15: “My wife is a nurse. She says at least two or three people die of coronavirus every day. Government inspectors, however, do not allow them to be registered as deaths due to coronavirus. They say the reason must be stated as heart stroke or something similar. They do not hand over the bodies to the families. Security agents take the bodies with special ambulances to unknown locations.”

Kermanshah also has a high death toll in its hospitals due to a lack of resources. People are treating themselves by traditional medicines. No one affords to be hospitalized.

On Wednesday, April 15, one of the medical staff of Farabi Hospital of Kermanshah said the number of covid-19 victims is so high that there are no containers left to hold more corpses. Many patients die in the general wards where other patients are also hospitalized. This has caused a spread f the virus. All officials are aware of this situation but they take no action.

On Tuesday, April 14, one of the residents of Mashhad, northeastern Iran, wrote: “The entire city is ravaged by coronavirus and incompetence of officials. The red alert is still in place but people are poor and they have to go to work. The streets are busy as if there is no such thing as coronavirus. Terminals and schools are the only places still shut down.”

One of the workers of Mashhad’s Shariati hospital said, “Anything the government declares, multiply it by ten. Due to the security presence, it’s not possible to report the figures.” The same source added, “Mashhad doesn’t have test kits. The test samples were sent to Tehran. The results will return in seven days and by then many of the patients will have died.”

One of the medical personnel who works in Isfahan reported on Tuesday, April 14: “Az-Zahra, Amir-al Momenin, Gharazi, Kashani, and many other hospitals admit only corona virus patients and reject other patients. Those who die in these hospitals are secretly transferred out of the hospital at night.”

Nahid Khoda Karami, head of the Health Committee of Tehran’s City Council, said: “According to my data, the best case scenario, 70 people die every day in Tehran, and in the worst case scenario, more than 100 die due to covid-19 infection. The Ministry of Health announced total figures which also include Tehran. The difference between the figures announced by the Health Ministry spokesman and what we have at hand must be sought in two issues: First, the test results for many of the deceased are diagnosed after their burial. The second reason is that the reasons for the deaths are mentioned as ARDS or respiratory distress. Perhaps this is the reason why the figures are different.”

Medical sources in the city of Neyshabur in northeast Iran say at least 270 people have died in this city, alone. The city’s hospitals and main cemetery are consequently facing major problems.

In Shiraz, south-central Iran, the number of victims has surpassed the 550 mark.

The number of people who have lost their lives in Bushehr in southern Iran is at least 290.

In Bukan, Saqqez and Piranshahr, cities that are in northwest and western Iran, the number of coronavirus cases and deaths have been increasing during the past few days.

The spread of COVID-19 in the northern and western regions of Gilan Province, northern Iran, is described as atrocious. 200 people have died in the city of Talesh alone while another 50 have lost their lives in the city of Astara. A large number of people are also dying of coronavirus in various villages and there are no numbers from these areas.

Labor activist summoned to court to serve 11 years in prison