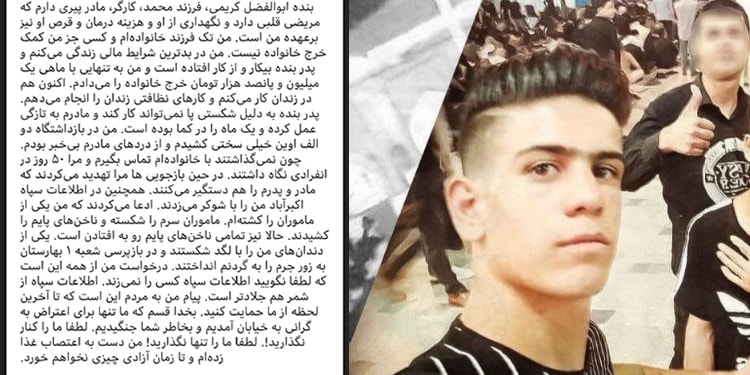 Abolfazl Karimi, a teenager arrested during the November 2019 protests.

Abolfazl Karimi, a teenager arrested during the November 2019 protests, recently wrote a letter stating that he had been tortured during interrogation and threatened with the rape of his girlfriend.

Aborfazl Karimi was born on November 27, 2001. He was a worker and the only breadwinner of his family. He was under 18 years of age at the time of arrest during the November 2019 protests.

Abolfazl Karimi has been sentenced to 27 months in and a fine of 10 million Tomans by the Revolutionary and Criminal courts. He has currently been held at the Great Tehran Penitentiary.

Five other protesters who were prosecuted with him have all since been released from prison. Of the five arrested, four were under 18 at the time of arrest.

The young man said that while interrogated in Tehran’s Evin Prison, he was told that if he did not talk, they would bring his mother.

“I said ‘what should I do?’ They said I had to say I was carrying a gun. I said, ‘I will be ruined, and my life will be destroyed.’ They told me they would bring my girlfriend and rape her. I cried,” Abolfazl Karimi wrote in his letter adding that he was subjected to “severe psychological torture”.

The young man says he was only allowed one call to his family during his initial two months of detention. He was later transferred to Fashafuyeh Prison.

Abolfazl Karimi wrote that he was the sole breadwinner of his family and was worried about his parent’s livelihood in his absence.

He works in the prison, cleaning up various parts of the jail. Following is the text of a letter he has sent out of prison:

“I was arrested on November 20, 2019 by IRGC Intelligence Agents… I was running towards my friends and the agents made two shots in the air by the time I reached my friends. They shot another round and I put my hands over my head. One of the agents kicked me in the face and I fell. Another one of them kicked me in the stomach and used vulgar language. Another agent hit me on the head with his gun and my head broke and started bleeding. They put a bag over my head and forced me into a car. Around thirty minutes later we reached the IRGC Intelligence Department in my neighborhood in Akbar Abad.”

“One of the agents punched me in the stomach and I couldn’t breathe… Ten agents beat me for close to an hour and then one of them told me to confess. I cried and said that I had not done anything. The agent used vulgar language and said that I was lying… (In another interrogation room) I was beaten for around 10 minutes by four to five agents.”

“I was forced to sit with my hands and feet bound on cold tiles until morning. (The next day) I was violently beaten by another agent in the car. I was interrogated for two days in Evin.”

“The reason I participated in the protests was because of an increase in the price of gas and food and because in light of Iran’s economic state, I was in a crisis. My expenses were more than my wages. The fact that my mother and father were sick, and my other problems only added to my suffering and I joined the demonstrations to protest these conditions. However, Judge Asgar Jahangiri accused me of hefty charges such as spreading propaganda against the Islamic Republic of Iran, sabotage and arson against public and state buildings and disrupting public order, which I did not accept. I cannot afford the 50 million toman (around $2,300) bail so I have been kept in a state of limbo in the Greater Tehran Prison since November 30, 2019. My family does not have suitable livelihood conditions and these problems will tear my family apart. My mother is sick, and her life might be in danger.”

“I joined the protests because of my difficult conditions and those of others like me. Those who participated in the November 2019 protests, who came to the streets to demand their rights, are now going through difficult time in the Greater Tehran Prison. They are trying to fend off COVID-19 despite the lack of healthcare and facilities in prison.”

“We are suffering from psychological problems in prison because we wanted justice. It is expected of our dear people to support their compatriots and always stand against injustice.”

Born on November 27, 2001, Abolfazl Karimi was under 18 when he was arrested in November 2019. He worked as a worker in a shoe factory in Tehran’s Bagh-Sepahsalar district.

He was arrested on the streets of Tehran on November 20, 2019 during nationwide protests. He was taken to Ward 2A of Evin Prison and was later transferred to the Great Tehran Penitentiary on January 23, 2020.

His first court hearing was held on May 3 by the 26th Branch of the Tehran Revolutionary Court. He was charged with “conspiracy and collusion against security” and “spreading propaganda against the state” and was sentenced to two years of prison, and six months of forced labor in the public services sector for four hours a day. The sentence was reduced to one year and six months of prison.

He was also sentenced to 15 years of prison by the 101st Branch of the Criminal Court of Nasimshahr on July 4 on charges of “sabotage, arson, theft, and disturbing public order”. This sentence was reduced to nine months of prison and a fine of 10 million Tomans (about $456) in the appeal stage.

Karimi was also accused of setting fire to a municipality vehicle but has denied the accusation.

Abolfazl Karimi’s friends Amir Hossein Jafari and Amir Hossein Mahmoudpour were tortured with electric shockers on their necks, hands, and foreheads in front of him during their incarceration.

He went on hunger strike in March to protest his continued detention under undetermined status.