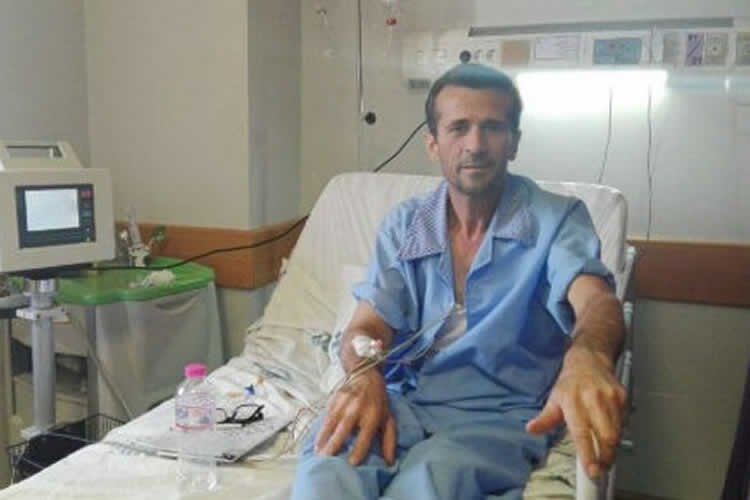 Infected labor activist Jafar Azimzadeh has started a hunger strike since Sunday August 16, after being transferred from Evin Prison to Gohardasht Prison (Rajai Shahr) in Karaj instead of a hospital.

Mr. Azimzadeh contracted the corona virus while in Evin Prison. After a clinic doctor diagnosed that he was an emergency case, prison authorities transferred him out of Evin but instead of taking him to a civic hospital, took him to Gohardasht Prison.

The infected labor activist was held in solitary confinement for two days without being allowed to contact his family.

The reason Mr. Azimzadeh went on hunger strike was to protest the authorities’ “deceiving him and taking him to Rajai Shahr Prison instead of a hospital,” “failure to observe hygiene protocols to fight the corona virus in prison and disseminating false reports from 20:30 TV news program pretending that there is no corona virus in prison”, and “keeping his family in the dark, torturing them psychologically and letting them wander around in Tehran’s hospitals.”

The random test results of prisoners were announced on Sunday, August 9, 2020. It became clear that Jafar Azimzadeh and 11 other inmates in Evin Prison had tested positive. On Sunday, August 16, Dr. Farjad, the night shift doctor in Evin Prison, diagnosed that Mr. Azimzadeh was in emergency conditions and had to be immediately taken to Taleghani hospital. However, instead, he was taken to Rajai Shahr Prison.

Since the telephones of the section where the infected inmates are detained were disconnected, Mr. Azimzadeh’s family did not have any news on him. So, they went to various Tehran hospitals to inquire about him. After being transferred to Rajai Shahr Prison, he was held in solitary confinement for two days without being allowed to contact his family.

Jafar Azimzadeh was serving his six-year sentence in Evin Prison. On August 12, the Revision Court of Tehran Province issued another sentence of 13 months in prison based on a new case filed against him.