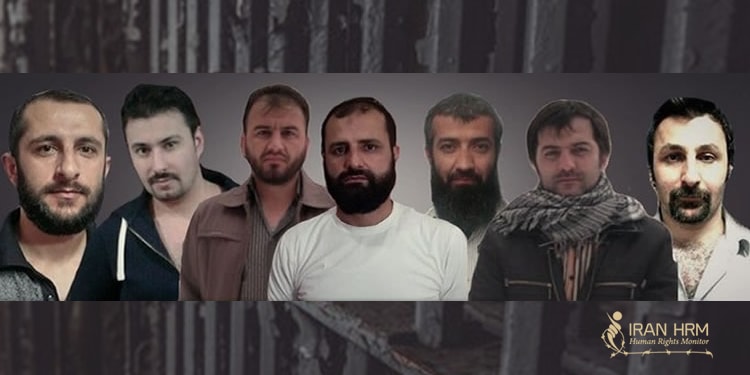 Branch 38 of the Iranian Supreme Court for a third time upheld the death sentences against seven Sunni political prisoners on September 10.

The Sunni inmates, Farhad Salimi, Qassem Absteh, Davood Abdollahi, Ayub Karimi, Anwar Khezri, Khosrow Besharat, and Kamran Sheikha, have been detained in Urmia, Evin, and Rajai Shahr prisons for 11 years. They had previously been sentenced to death in Branches 41 and 42 of the Supreme Court.

The Supreme Court accepted the appeal by the prisoners’ families and referred the case to Branch 38 for retrial.

The seven Sunni political prisoners were arrested in 2009 based on bogus charges filed by the Ministry of Intelligence. They were charged with “acting against national security,” “propaganda against the state,” “membership in Salafi groups,” “corruption on earth,” and “Moharebeh (waging war on God).”

All the seven men are currently held in Ward 7 of Rajai Shahr Prison in Karaj, west of Tehran. They have repeatedly gone on a hunger strike to protest the inhumane prison conditions.

The Iranian regime has stepped up issuing death sentences and heavy prison terms for political prisoners and those arrested during the protests. On August 5, they hanged Mostafa Salehi, father of two, who had been arrested during protests in December 2017 and January 2018.

The death sentences are aimed at intimidating future protesters. There has also been a rise in death sentences handed down for members of ethnic and religious minorities.

In a statement on July 15 following the execution of two Kurdish men, Diaku Rasoulzadeh and Saber Sheikh Abdollah, Amnesty International said “There has been an alarming escalation in use of the death penalty against protesters, dissidents and members of minority groups in Iran.”

The rights group said that at least five prisoners from Iran’s Kurdish minority, including Heydar Ghorbani, were at risk of execution.

According to Amnesty another Kurdish prisoner on death row, Hedayat Abdollahpour, has been forcibly disappeared since May 9, 2020 as the authorities refuse to reveal the truth concerning his secret execution and return his body to his family.

A seventh Kurdish prisoner, Mostafa Salimi was executed on April 11, 2020 in the city of Saqqez, in Kurdistan province. Salimi had managed to escape in late March along with tens of other inmates during a protest by inmates against prison conditions amid the coronavirus outbreak. He was executed shortly after being re-arrested.

“Iran’s increasing use of the death penalty as a political weapon for repression is alarming and warrants the immediate attention of the international community. Without urgent diplomatic and public action, more lives in Iran are at risk of being cut short by the state’s execution machine,” said Diana Eltahawy, Amnesty International’s researcher on Iran.