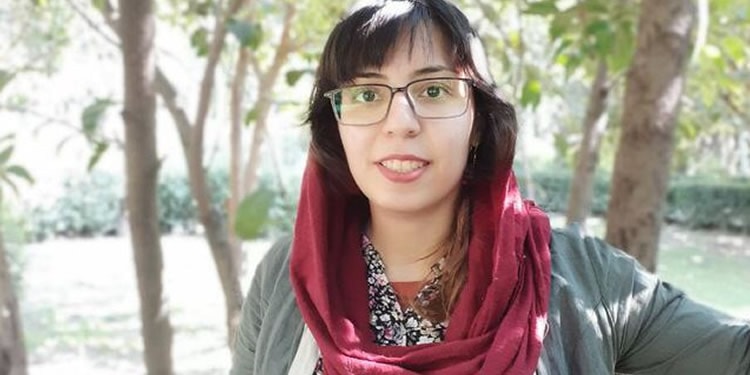 Student activist Soha Mortezaei was sentenced to six year in prison for holding a solitary sit-in outside Tehran University in protest to being banned from education for her political activities.

The verdict which has ben announced to Mortezaei’s lawyer has been issued by notorious Judge Abolqaem Salavati of Branch 15 of the Revolutionary Court.

The last hearing of Mortezaei’s case was held on September 9, at Branch 15 of Tehran’s Revolutionary Court.

A former secretary of Tehran University students’ council, Soha Mortezaei was arrested on November 17, 2019 after she launched a 21-day sit-in at the university to protest being denied enrollment in a PhD program because of her activities.

She was in Tehran University’s Fatemiyeh Dormitory when she received a text message to go to the front gate. There, she was brutalized and abducted along with two other students and taken away.

She was first taken to Ward 2A of Evin Prison run by the Revolutionary Guards, where she was exposed to tremendous pressure and interrogation.

She was then taken to women’s Qarchak Prison in Varamin on the on December 31, 2019.
She was temporarily released from Qarchak Prison on January 22, 2020, after depositing a 500-million-toman bail.

Student activist Soha Mortezaei has a masters of political sciences. She won admission to the doctorate level as the 10th ranking student, but the Intelligence Ministry and the university’s intelligence department prevented her from continuing her education, something that provoked her to hold a solo sit-in outside Tehran University’s library for 21 days.

During a meeting with the Mortezaei family in October 2019, Esmail Soleimani, the head of security at the University of Tehran, threatened to force electric shock therapy on Soha “if she refuses to stop her activities.”

The intelligence Department of Tehran University summoned the family and told them to sign a paper indicating their consent to transfer Soha Mortezaei to a mental hospital where she could receive “electric shock treatment” to come to her senses, otherwise they would add 2.5 years to her 6-year prison term. Apparently a psychologist was also present at the meeting.

Soha Mortezaei has a previous record of being arrested for her peaceful activities.

She was once arrested during the December 2017-January 2018 protests and later sentenced to six years in prison. The sentence was eventually reduced to one year in prison on appeal.
In April 2020, the student activist was summoned to serve her prison term despite horrible conditions of Iranian prisons during the coronavirus pandemic

Mortezaei had previously been arrested in late January 2015, along with a number of activists from Amirkabir and Allameh Tabatabai Universities, and was released after about two months.