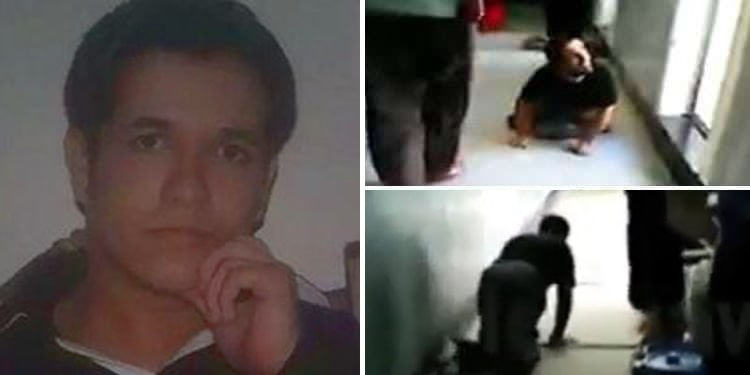 A Kurd prisoner who is more than 70% disabled was brutalized and humiliated on the order of prison officials in Urmia.
Akbar Rashidi, 34, has been serving a 21-year prison sentence in Urmia Central Prison in northwest Iran.

An informed source said on Wednesday, February 3, “Akbar Rashidi, a 34-year-old prisoner with a disability of over 70%, set himself on fire in Urmia Central Prison in recent days to protest the lack of medical treatment. However, he was harshly treated and beaten by prison officials.”

The source said that in recent days, instead of responding to the prisoner’s complaints, Judge Sheikhlou has threatened to banish him to a prison in Sistan and Baluchestan Province.

34-year-old Kurd prisoner of conscious Akbar Rashidi who is more than 70% disabled has been serving a 21-year prison sentence in Urmia Central Prison in northwest Iran.

The General Department of the Coroner’s Office in Urmia in January confirmed severe disability the Kurdish prisoner of conscience, but said he could tolerate prison conditions despite his condition.

The disabled Kurd prisoner is not even able to do his personal matters alone and his cellmates help him in carrying out his daily tasks.

The Second Branch of the Revolutionary Court of Urmia sentenced the Kurdish prisoner to 15 years in prison for “Baghi” and “cooperation with religious groups opposed to the regime”, five years for “acting against national security” and one year for “spreading propaganda against the state.”

The Kurdish citizen has been sentenced to three years in prison on charges of “Baghi” and “cooperation with religious groups opposed to the regime,” “Propaganda against the state”

He would have to serve 15 years behind bars according to Article 134 of the Islamic Penal Code, which allows defendants to serve only the longest sentence in cases involving multiple convictions.