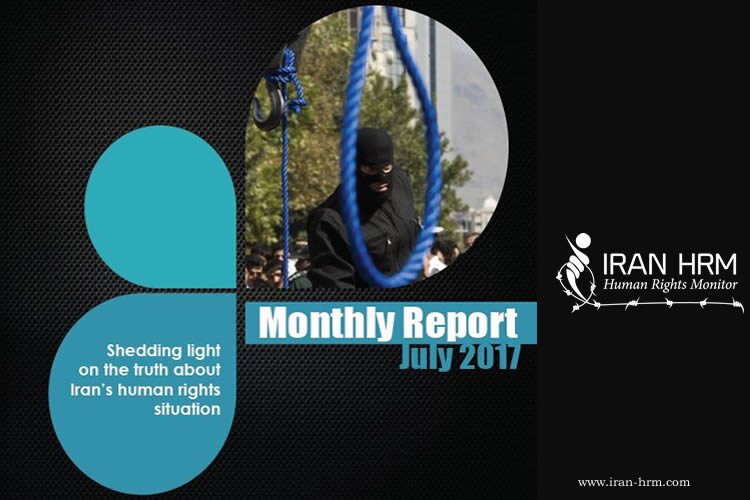 July saw many violations of human rights in Iran, the most important being:

At a time when the move towards the abolition of the death penalty is spreading around the world, Islamic Republic of Iran insists on executions which clearly are in contravention the international human rights law.

Iran alone accounted for 55% of all recorded executions in 2016; Amnesty International says.

Seeking to rein in increasing protests and the abhorrence of the younger generation in cities across the country, the Iranian regime has intensified the crackdown on society through increasing the wave of executions. The month of July alone saw 103 executions from which seven were made public by media press.  This shows how the state of human rights had been deteriorated during the past month.

Under the pressure of the rising tide of protests against the situation of human rights in Iran, the Iranian government took the ambassadors of 50 foreign countries for a tour of the notorious Evin prison in Tehran on July 5, 2017 to judge for themselves how the state treats prisoners. Ahead of the visit, some prisoners in building 4 were also transferred to create an illusion of humane living conditions. Walls were freshly repainted and the remaining prisoners warned against approaching the diplomats to voice any concerns they might have.

Unsurprisingly many areas of the prison remained off limits to the foreign delegates. They were only granted access to a handful of sections in buildings 4 and 7, mostly housing wealthier prisoners convicted of financial crimes.

The PR show was preceded by an absurd claim made the day before, by Javad Larijani, an Iranian regime’s human rights official, indicating that there were no political prisoners in Iran. After the foreign diplomats’ visit to Evin, the Iranian state media outlets followed suit, pumping reports claiming that Iran’s biggest jail had been upgraded to state-of-the-art conditions.

The orchestrate display however was quickly exposed to show its true face by prisoners- men and women who experience torture and hard prison conditions on a daily basis in this notorious prison.

A number of political prisoners and prisoners of conscience addressed open letters to the ambassadors who recently visited Evin Prison. They wrote about issues that had been concealed by the Iranian regime’s authorities during their visit.

The sequel of events makes complete sense. The orchestrated tour of Evin by foreign diplomats, without any human rights organization or expert accompanying them, was an attempt on the part of the regime to debunk growing international criticism of Iran’s human rights violations, especially in its prisons.

This report, attempts to shed light on the truth about the tragic situation of human rights in Iran.