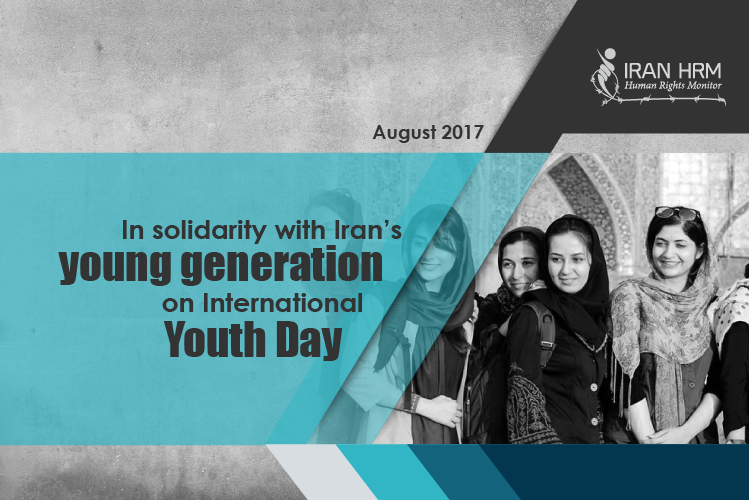 August 12 marks International Youth Day to recognize and draw attention to the issue of “Youth Building Peace”. It celebrates young people’s contributions to conflict prevention and transformation as well as inclusion, social justice, and sustainable peace.

In Iran, however, the atmosphere of growth and advancement for the younger generations have been eliminated by the Iranian regime’s suppression of their freedom of speech and the press, closure of universities, sending young people to war, and plundering the public’s wealth. Thus Iranian youths have found no opportunity for contributing to global peace.

A population of 23 million people between 15 to 29 years of age has made Iran one of the world’s largest young nation.

This young nation, however, faces soaring unemployment as one of its main problems. Almost 15 million people have no jobs, at least 4.5 million of whom are university graduates.[1] In 1986, almost 70% of university graduates could find jobs shortly after leaving school. By 2011, that rate dropped to less than 50%.[2]

That is, more than 50% of Iran’s educated are unemployed while the rest are employed in menial jobs such as construction workers, street peddlers, repairmen, etc. which are not compatible with their professional training and studies.

Under such hopeless circumstances, the majority of Iran’s at least 14 million[3] drug users are young men and women. The average age of addiction in Iran has dropped to 20, according to reports published by state media. [4]

The number of people suffering from drug addiction has more than doubled since 2011, according to a survey by a drug control group.[5]

However, the figures published by the state should be considered as minimum with the actual figures being considerably higher. Disappointingly, the Iranian regime has no short or long-term plans to contain the unbridled spread of addiction especially among the young populace.

Experts argue that easy access to cheap narcotic drugs has contributed to the horrific number of drug addicts in Iran. It is common knowledge that narcotics can be purchased much faster than a loaf of bread.

Unfortunately, the regime in Iran and specifically its Islamic Revolutionary Guards Corps (IRGC) are actively involved in drug trade and distribution as they find this as one of the most effective ways to quell and paralyze the country’s disgruntled and rebellious youth, posing an existential threat.

In addition, the human rights situation in Iran has been constantly deteriorating over the past 39 years. The clerical regime has a long history of crackdown on youths for demanding their basic rights. Atena Daemi, Arash Sadeghi, Majid Assadi, Golrokh Iraei, Ramin Hosseinpanahi are amongst the countless people who have been suffering long years in jail for daring to stand up for their own and their people’s rights.

Iran holds the highest rate of per capita executions in the world. Despite increasing international censure, executions are carried out relentlessly on a daily basis hitting an unprecedented record by hanging 101 prisoners in July 2017, alone.

The majority of those executed were under 30 years old including two young men, 24 and 27, who were hanged in public. In a controversial act of execution, a man who was arrested as a minor was hanged in Adelabad Prison of Shiraz, southern Iran. Execution of Alireza Tajiki was carried out despite wave of international criticism at Iran’s human rights violations.

In a recent study, a third of all 16 to 25-year-olds said they would leave the country, if given the opportunity. Iran ranks world’s first in brain drain with the flight of 150,000 elites per year.

Those who cannot escape the inferno created by the mullahs in Iran, however, are awaiting any opportunity to settle their score with the mullahs.

In a recent case, Asghar Nahvipour, a young Iranian athlete, beat up a mullah who was disturbing a young woman in a metro station in south Tehran. Eyewitnesses say he was fired at point blank range by the police while he was crying out, “We don’t want these mullahs. We don’t want this Islam. What kind of a country is this? What kind of Islam is this?”

The news of this arbitrary murder outraged the nation and aroused great sympathy.

Tributes to the victim poured in on social media, with many youths writing, “The heroes do not die”, “Fly high hero, you will be never forgotten” or “we will continue your path.”

These mottos bespeak of the determination of Iran’s courageous youth to realize a humane future for themselves and the whole nation. The International Youth Day is an appropriate opportunity to call on the international community to support their demands and help them reach the peaceful society they deserve.

As we celebrate the young people building peace across the world, lest forget the young men and women who dream of a world with equal human rights.