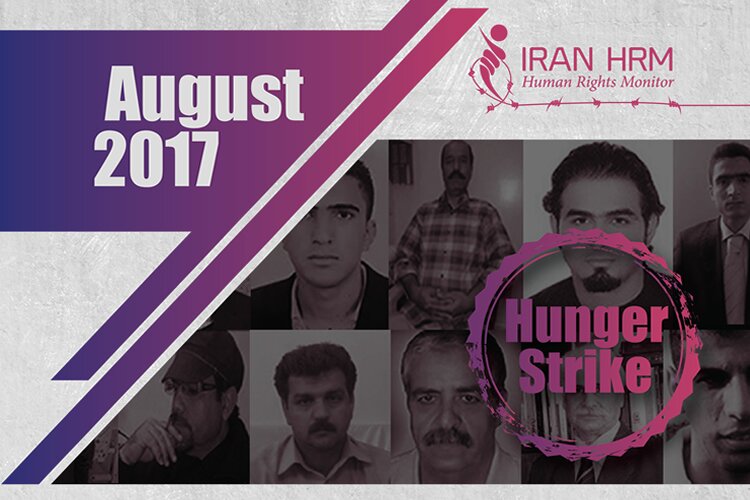 August was marked with numerous cases of human rights abuses. In this report, we will draw your attention to a brief summary of these issues.

One of the main cases of human rights violations was the brutal and humiliating transfer of political prisoners of Gohardasht Prison to Hall 10 which has led to an ongoing hunger strike.

The executions recorded by Iran Human Rights Monitor has reached at least 55.

They include four which were carried out in public, and two instances of mass executions involving groups of seven and 11.

The execution of a young man who was arrested as a child, Alireza Tajiki, attracted the attention of human rights communities.

At least 20 arbitrary murders by the state forces have been registered.

Border guards continued targeting porters resulted in the deaths of dozens of deprived porters. A fruit peddler was also killed in cold blood by the municipality agents as he was beaten and his head hit the ground.

Arbitrary shooting of religious minorities led to the death of a young Sunni man.

The number of executions registered by Iran Human Rights Monitor in the month of August alone has surpassed 55. These figures do not include secret executions and the actual figures must be considerably higher.

Many of those transferred to solitary confinement in preparation for their deaths had their executions scheduled then postponed or stayed at the last minute on multiple occasions, adding to their torment.

Mehdi Bohlouli, who was only a child at the time of the crime was transferred to solitary confinement on August 14 in preparation of his execution along with seven others. It was the fourth time he had been taken for execution. His death sentence had been halted on previous scheduled dates before.

Among the executed, six were under the age of 20 at the time of their arrests.

Alireza Tajiki who was just 15 at the time of his arrest was executed on August 10, 2017. He was sentenced to death in April 2013 after a criminal court in Fars Province, southern Iran, convicted him of murder and lavat-e be-onf (male on male rape). The trial was grossly unfair and relied primarily on “confessions” which Alireza Tajiki has said where extracted through torture, including severe beatings, floggings, and suspension by arms and feet.

The 55 executions include four which were carried out in public, and two instances of mass executions involving groups of seven and 11. Six executions were made public by the state media.

Seyed Jamal Mousavi, a Sunni Kurdish political prisoner, was executed on August 23 on the bogus charge of moharebe (enmity against God) for having contact with Sunni groups. He had endured nine years behind bars.

According to reports released by Iran Human Rights Monitor, at least 20 arbitrary murdrs were carried out this month.

Border guards continued targeting porters resulted in the deaths of dozens of deprived porters. Many of those killed or wounded are deprived porters under the age of 18.

On the night of August 20, security forces targeted and shot a Kurd porter. He was identified as 17-year-old Vahid Dolatkhah Janikanlo. According to an informed source, he was severely wounded and died at the hospital from the severity of his wounds.

In yet another case on Saturday, August 12, a fruit peddler was killed in cold blood by the municipality agents as he was beaten and his head hit the ground, an eyewitness said. He had already accepted to pack his stuff and go home when the municipality agents arrived, but he was attacked, insulted and beaten by them and his head hit the ground while he was preventing them to confiscate his car, His brother explained in a video clip shared on social media.

The number of arrests registered in the month of August was at least 220 including 127 social arrests, 22 political arrests and 70 arrests on religious grounds.

There were cases of physical torture and flogging in August.

The State Security Forces publicly flogging a man in Torbat-e Jam in in Khorasan Province for drinking liquor. Click here to watch the video clip.

A Baluchi prisoner had a row with a security guard during which the guard hit the man with a metal seal and broke his leg.

On July 30, the Warden of Rajaii Shahr Prison along with special execution guards known as Black Masks, attacked Hall 12 of Ward 4, beating prisoners there and damaging their belongings.

The prisoners were subsequently transferred to Hall 10 located in the maximum-security section used for detention of prisoners affiliated with ISIS and al-Qaeda.

All openings and windows have been covered and sealed with metal sheets.

At least 20 prisoners have gone on hunger strike, protesting this transfer and the inhuman conditions they have been forced to endure.

In an apparent attempt to punish the prisoners, some of the prisoners were transferred to solitary confinement with handcuffs and shackles.

Prisoners are in critical health conditions. Some of them can barely stand on their feet and repeatedly fainted during visitation. They also strongly shake due to weakness despite hot summer.

Some of the hunger strikers urgently need special medical care outside of the prison but the head of the prison is refusing to authorize their transfer to hospitals.

Despite an international wave of support for the demands of hunger striking political prisoners, Tehran’s prosecutor declared on August 22 that the judiciary will not “surrender” to the prisoners’ hunger strike.

The state-run Mehr news agency cited Abbas Jafari Dolatabadi as saying, “We declare to some prisoners who have gone on hunger strike or launched other threats, that such measures are doomed to fail. The Judiciary will not surrender to such affairs. The punishment of prisoners must be fully implemented. We are not supposed to be affected by some prisoners’ actions, including hunger strikes.”