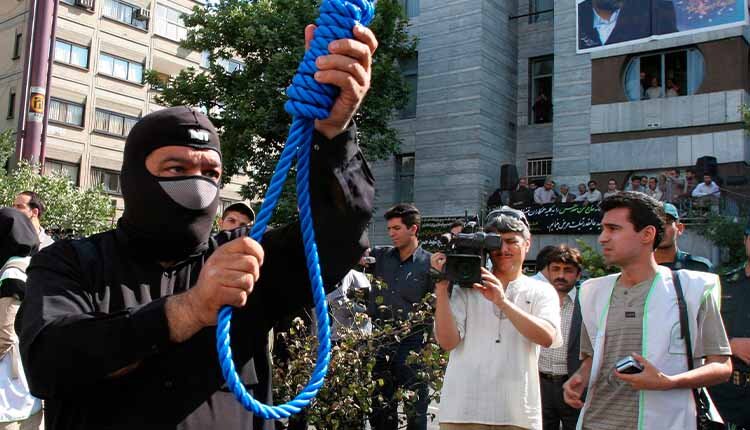 File photo - Preparing noose for the public execution of Majid Kavousifar who had been sentenced to death for killing of Hassan Moghaddas, a notorious deputy prosecutor and head of the "guidance" court in Tehran, in central Tehran, Iran on August 2, 2007.

According to the data collected from material published by the Iranian state-run press, human rights activists and their websites, or from our private sources, since the beginning of 2019, more than 99 executions were carried out in Iran.

Nevertheless, the actual figures are definitely higher, as most executions in Iran are carried out secretly without anyone knowing except those who carry it out.

Out of the 99 individuals executed since January, 97 were men and two were women.  Eight were publicly executed.

These executions are in contravention of International Covenant on Civil and Political Rights.

Iran Human Rights Monitor received reports indicating that in 2019 at least three people in Iran were executed for crimes committed when they were under 18 years of age.

Mehdi Sohrabifar and Amin Sedaghat were 15 when they were convicted in 2017 on multiple rape charges, after what activists said was an unfair trial.

They are believed to have been moved from a juvenile facility to Adel Abad prison in the southern city of Shiraz a day before their deaths.

Iranian authorities did not inform the boys’ families or lawyers that they had been sentenced to death.

The families learned of the news a day later, when they received telephone calls from Iran’s Legal Medicine Organisation.

According to Amnesty International there were lash marks on the bodies, indicating that they had been flogged before their deaths.

Iran also sentenced to death other people for conduct that did not amount to a recognizably criminal offense, such as “waging war on God” and “spreading corruption on earth.”

In a recent case, Iran’s judiciary sentenced a man for affiliated with the People’s Mojahedin Organization of Iran (PMOI/MEK).

34-year-old Abdullah Ghasempour was arrested on May 21st, 2018 for setting fire to a Revolutionary Guards (IRGC) Basij base, filming the event, and sending it to the MEK media. On Sunday, the notorious judge, Mohammad Moghiseh, sentenced Ghasempour at branch 28 of Tehran’s Revolutionary Court, to death, plus eight years in prison, on charges of “waging war on God,” “assembly and collusion,” and “membership in the MEK.”

Iran is the world’s leading per capita executioner. It also holds the record in the execution of women and minors.

The Iranian regime is among those governments that execute their opponents.

In the summer of 1988, the Iranian regime summarily and extra-judicially executed more than 30,000 political prisoners.

The 1988 massacre was carried out on the basis of a fatwa by the regime’s then-Supreme Leader Ruhollah Khomeini.

There are strong indications that Khomeini’s fatwa, which led to the massacre of some 30,000 political prisoners in Iran, was issued on July 26, 1988.

Khomeini decreed: “Whoever at any stage continues to belong to the Monafeqin (the regime’s derogatory term to describe the PMOI/MEK) must be executed. Annihilate the enemies of Islam immediately.” He went on to add: “… Those who are in prisons throughout the country and remain steadfast in their support for the MEK/PMOI are waging war on God and are condemned to execution… It is naive to show mercy to those who wage war on God.”

The Iranian regime has never acknowledged these executions, or provided any information as to how many prisoners were killed.

The majority of those executed were either serving prison sentences for their political activities or had already finished their sentences but were still kept in prison.

Some of them had previously been imprisoned and released, but were again arrested and executed during the massacre.

By the time it ended in the autumn of 1988, some 30,000 political prisoners, the overwhelming majority activists of the People’s Mojahedin Organization of Iran (PMOI/MEK), were slaughtered.