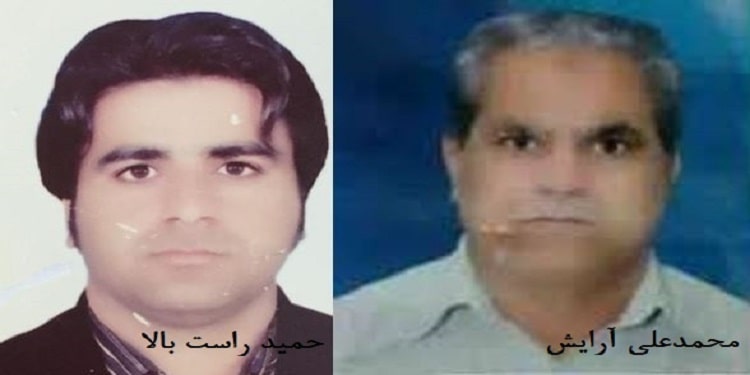 The three Sunni political prisoners were transferred to an unknown location on Wednesday, December 30, and were deprived of family visits before their execution. Their families and lawyers were not informed about the executions in advance.

The families and lawyers were desperately trying to obtain information about the three men since Wednesday. Subsequently on Sunday, they were told that the execution had been carried out three days ago.

Iranian law requires the government to notify lawyers of a scheduled execution of their client 48 hours in advance and to grant families the right to visit their condemned relative for the last time.

According to an informed source, the three prisoners were called by prison guards the night before their execution at around 9:30 p.m.

“To avoid any protest by inmates, prison agents told the three men that they are called to answer some questions. To pretend that the conditions are normal, they also called another three prisoners. But later they sent them back,” the source said.

“Hamid Rastbala, Kabir Sa’adat Jahani and Mohammad Ali Arayesh were then transferred to solitary confinement before the execution,” the sources added.

The source quoted one of the cellmates of the prisoners as saying: “The next morning, as we waited, Hamid did not come for fresh air. We asked, “Where is Hamid?” “They said he was executed this morning.”

The death sentences of the three prisoners, along with six others, Farhad Shakeri, Issa Mohammadi, Hakim Azim Gargij, Taj Mohammad Khormali, Abdolrahman Gargij, and Hossein Varasteh Soleimani, were issued in 2049 and were notified to them on August 10, 2020.

The prisoners were sentenced to death by Branch 1 of the Revolutionary Court of Mashhad on charges of “baghi” (armed rebellion) through membership in the Al-Furqan party group and membership in the Sunni National Solidarity Front.
This is while the Al-Furqan group was active between 1992 and 1997, when the three Sunni men were 10 to 12 years old.

These Sunni political prisoners were denied the right to a lawyer of their choice during their trial.
They were arrested by the intelligence agents in 2015 and were kept in solitary confinement in the detention center of the Mashhad Intelligence Department for 10 to 12 months.
They spent about four years in Vakilabad prison in Mashhad.

Iran Human Rights Monitor strongly condemns ongoing executions in Iran, especially of Sunni prisoners, and calls on the United Nations, international human rights organizations, and the European Union to act to save the lives of death row prisoners.