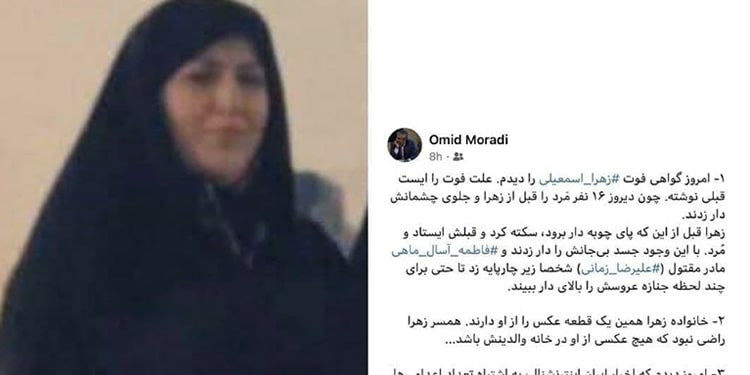 The lawyer of a woman recently executed in Iran said Friday that the authorities hanged his client despite suffering a fatal stroke before her execution.

In a Friday post on his facebook account which was later deleted, Omid Moradi said that Zahra Esmaili suffered a fatal stroke after witnessing 16 men being hanged befor her and authorities hanged her dead body. He said that Esmaili’s death certificate states “cardiac arrest” as the cause of death.

“It states cardiac arrest as cause of death because yesterday 16 men were hanged before her eyes. Zahra’s heart stopped and she died before she was taken to the gallows,” Moradi wrote.
“They hanged her lifeless body, and the victim’s mother, Fatemeh Asal-Mahi, personally kicked the stool from under her feet so she could see her daughter-in-law’s corpse on the gallows for even a few seconds.”

Zahra Esmaili, mother of two, was found guilty of killing her husband whi was a senior agent in the Ministry of Intelligence, according to Omid Moradi.

She was hanged at dawn on Wednesday, February 17, 2021, in Rajaei Shahr prison of Karaj, west of the capital Tehran.

Zahra Esmaili was a victim of domestic violence and had murdered her husband in self-defense. Her husband, a high ranking intel official frequently battered her.

She was transferred to solitary confinement in a group of 10 death-row prisoners on Monday, February 15, to be prepared for execution. She had been serving her jail sentence in the notorious Qarchak Prison.

The clerical regime has executed three women in recent weeks in the prisons of Ardabil, Sanandaj and Karaj. This brings to 114 the total number of executions of women during Rouhani’s tenure as the regime’s president.

Iran HRM calls on the UN High Commissioner for Human Rights, the UN Human Rights Council and other institutions defending human rights to take urgent action to save the lives of Iranian prisoners on death row. The Iranian regime’s dossier of human rights violations must be referred to the UN Security Council. The leaders and officials of the clerical regime in Iran must face justice for four decades of committing crimes against humanity.