Harassment of journalists intensified ahead of Iran’s presidential election 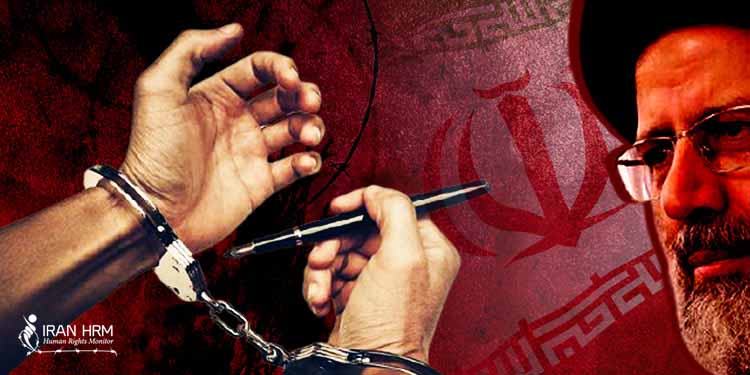 Authorities intensified pressures and harassment of Iranian journalists and reporters to silence criticism of state policies.

There are numerous reports that the intelligence agents in the Islamic Revolutionary Guard Corps (IRGC) have contacted several social media activists, threatening them not to post content that criticizes Iran’s Chief Justice and presidential candidate Ebrahim Raisi, otherwise they will be in “trouble”.

Several media workers who sought to report about Raisi’s background were subjected to pressure and a few of them were summoned to appear before judicial or security authorities.

Mehdi Mahmuodian, an Iranian journalist tweeted on May 20 that two people were summoned on May 15 for posting tweets criticizing Ebrahim Raisi.

“Mr. Raisi has said he opposes social media limitations but his agents in the Judiciary are contacting activists and media reporters every day asking them to remove their posts against Raisi. Two people were summoned on Saturday just for tweeting against Raisi,” Mehdi Mahmoudian tweeted.

Other reports indicate the Head of the Culture and Media Court, a court affiliated with the Judiciary that deals with offenses in the media, has called several journalists and reporters asking them not to criticize Raisi, the Supreme Leader’s favorite presidential candidate.

Ehsan Badaghi, a reporter for the Iran state newspaper, wrote on his Twitter that the head of the Culture and Media Court contacted him to remark “very politely” the necessity of “observance of the law in election writings.”

Security police and Iran’s Cyber Police (FATA) have also contacted many activists, putting them under pressure because of their stance.

The International Federation of Journalists (IFJ) on May 26, described the recent “judicial warnings” against the Iranian journalists as “harassment of independent and critical journalists” and condemned it.

In a statement issued on Wednesday, Anthony Bellanger, secretary general of IFJ, commented the recent pressures and harassment of Iranian journalists saying: “This is yet another example of how the Iranian government uses the legal system to clamp down on independent voices in the country.”

“Iranian journalists must be able to report about the presidential campaign free from judicial warnings and pressures from the authorities,” Anthony Bellanger said.

In a 25 May press conference, the spokesperson for the Judiciary, Gholamhosein Esmaily, formally confirmed that a warning has been sent to all media and news outlets concerning the election and campaigns.

According to the U.S. State Department’s 2020 annual human rights report, “The government (of Iran) severely restricted freedom of speech and of the press and used the law to intimidate or prosecute persons who directly criticized the government or raised human rights problems.”

Dozens of journalists and media workers and other citizens accused of publicly criticizing state policies or officials have been sentenced to lengthy prison terms in Iran under national security charges in the past few years.

Recent cases of pressures and harassment of Iranian journalists

A Kurd journalist was detained in the western province of Ilam for writing a piece that was critical of Ebrahim Raisi, Iran’s current Chief Justice and presidential candidate. the journalist, identified as Kaveh Najaf Mehdipour, was detained on May 18 on the order of Judge Sohrabizadeh Malekshahi, the head of the Darreh Shahr Revolutionary Court. An informed source said Kaveh had published an article criticizing the actions of Ebrahim Raisi.

On May 17, another Kurd journalist identified as Amin Mohammadi was detained in Ilam on the orders of a judge in the Ilam Court. Mohammadi is a member of the Ilam Press House and was detained after a complaint from a government organization in Eyvan County. According to the state-run ISNA News Agency, the Deputy Prosecutor of Ilam denied the arrest of Amin having to do with the content he had written and said he was detained due to an older complaint.