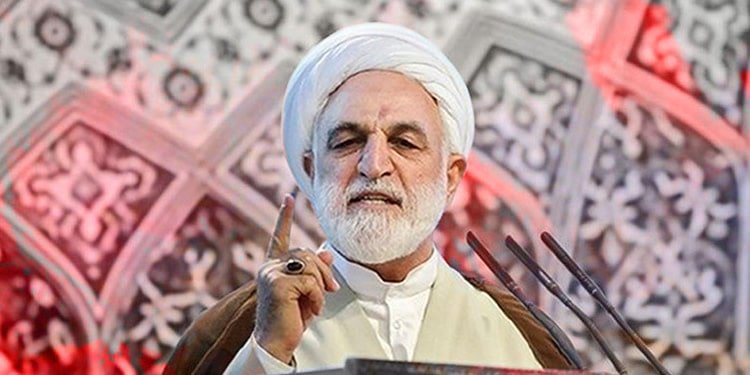 Gholam Hossein Mohseni Ejei, who had earlier worked as prosecutor-general and intelligence minister, takes over a judiciary blasted by rights groups for its record of being one of the world’s top executioners.

He comes with a background of violence, crime, and persecution against protesters and dissidents. Ejei has been blacklisted by the U.S. and European Union for his human rights violations.

Who is Gholam Hossein Mohseni Ejei?

Ejei is a security and judicial figure in the government. His activities over the years have been mainly in these two areas.

As a key figure in the judiciary, he has publicly defended executions and killings in Iran. On May 14, 2017, during the election a journalist asked him, “the judiciary had dealt with criminals for 38 years and executed some; What do you think about this?”

“It must be the case that since the beginning of the revolution, the judiciary has dealt with corrupters, terrorists and those who disrupt the security of the people!” he replied.

A brief history of Mohseni Ejei

The most anti-women judge in the world

On June 2, 2011, in Madrid, the jury awarded Gholam Hossein Mohseni Ejei to be the winner of the International Bludgeon award.

The award was presented to Ejei by the International Women’s Communication Organization.

In 2017, during a press conference, Mohseni Ejei defended the regime’s policy of mass executions and torture and said, “Since the beginning of revolution, the judiciary has dealt with corrupt people and terrorists and those who are disrupting security.”

Ejei acknowledged that lashing, hanging, crucifying, throwing prisoners from heights, and other medieval punishments have been the norm under the mullahs’ rule and “if a group wants to disrupt security, we will deal with them as we have throughout these years.”

At another press conference in 2016, Gholam Hossein Mohseni Ejei defended the regime’s brutal killing of protesters in 2009 and said, “No one should try to defend the criminals of the 2009 sedition, the seditionists were criminals, they are criminals and those who were punished deserved it. Those who are still on the run, if the establishment finds them, they will be punished.”

In 2011, Mohseni Ejei threatened women and girls who disobey the regime’s hijab rules and said, “The judiciary and the general attorney supports the state security forces for dealing with those who break hijab rules.”

In 2010, the U.S. Treasury blacklisted Gholam Hossein Mohseni Ejei as one of several Iranian officials “responsible for or complicit in serious human rights abuses” and “who share responsibility for the sustained and severe violation of human rights in Iran since the June 2009 disputed presidential election.”

“As the Minister of Intelligence at the time of the June 2009 election, Mohseni Ejei has confirmed that he authorized confrontations with protesters and their arrests during his tenure as Minister of Intelligence,” the U.S. Treasury wrote in a statement. “As a result, protesters were detained without formal charges brought against them and during this detention detainees were subjected to beatings, solitary confinement, and a denial of due process rights at the hands of intelligence officers under the direction of Mohseni Ejei.”