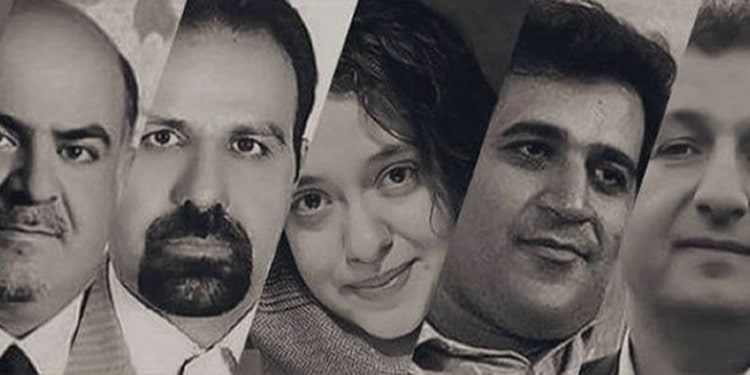 The state security forces raided the homes of detained lawyers two weeks after they were unlawfully arrested along with their colleagues.

Security forces raided the homes of detained human rights lawyers, Arash Keykhosravi and Mohammad Reza Faghihi, in Tehran on Wednesday, August 25, and searched their homes to collect or plant evidence to build a case against the lawyers.

During the search of Arash Keykhosravi’s home, security forces locked his room for a few minutes and did not allow family members to enter. They even took a CCTV camera with them. It is yet unclear which state agency they represented.

Keykhosravi and Faghihi along with Mehdi Mahmoudian (civil activist), Mostafa Nili (lawyer), Leila Heydari (lawyer), and Maryam Afrafaraz (civil activist) were arrested in Tehran on August 14, 2021, and their phones and other personal belongings were confiscated without a warrant. Heydari was released the following day.

Attorney Saeed Khalili tweeted on August 25: “This morning I went to the Evin, magistrate to declare my representation of my dear colleague Mr. Faghihi upon his family’s request and at the front gate I was told that no lawyers would be accepted, and no one would be released on bail. On my way back I was informed that agents had raided his home and were carrying out a search.”

On the same day, human rights lawyer Saeid Dehghan tweeted: “Security agents raided the paternal home of Arash Keykhosravi today. They (went inside) his room, closed the door and didn’t allow his relatives inside for several minutes. It was a setup to ‘gain reason’ (for the raid) by planting evidence! They first detain you and then search for a reason! They also took away the closed-circuit cameras so that there would be no evidence of the raid.”

In the past weeks, the Delta variant of the deadly COVID-19 virus has been ravaging across Iranian cities. In Tehran, the daily deaths reached a new record of 390 yesterday. The Deputy Minister of Research and Technology in Iran’s Health Ministry said in a letter on August 12 that the daily deaths from COVID-19 will reach 800 if the situation does not worsen.

State-run media report of hospitals and ICUs brimming with COVID-19 infected patients. At the same time, cemeteries are filled, and provinces report not having enough room to bury the bodies.

Iranians are openly blaming Khamenei for the deaths of COVID-19 victims, who could have been saved if he had not banned the reputable US and UK-made vaccines.