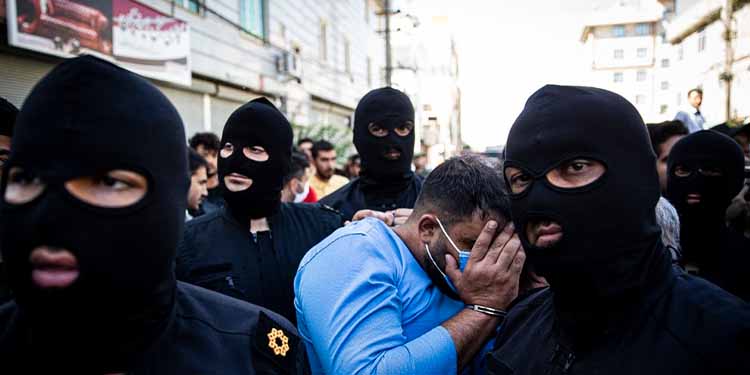 Iranian authorities paraded seven men in the streets of Tehran as a way to publicly degrade and humiliate them today. They were accused of confronting and attacking the state security forces.

In a humiliating manner, the police officers paraded the men in the village of Morteza Gerd where they live.

The state-run Tabnak website reported today that seven ‘thugs’ who attacked police officers during a clash this week in the Morteza Gerd neighborhood and wounded one of them with a machete; were paraded this morning, Thursday, June 10, with the presence of Hossein Rahimi, the police commander of the capital, in the area.

The state media has published a video of the public display of violence and humiliation showing masked security forces parading the men while forcing them to “repent” in public.

This is not the first time Iranian police parade locals on the streets with the backing of the Judiciary. Iran’s state media have published videos and reports of the public degradation of locals who were charged with “public thuggish behavior” in the past. In past videos, the men were paraded in police trucks, while masked security forces slapped and manhandled them, forcing them to “repent” in public.

These “criminals” are paraded in public before they are tried and officially charged and are usually publicly humiliated only days after their arrest.

The regime’s displays of public humiliation have outraged Iranians who have compared the parading of Iranians on the streets with similar measures carried out by ISIS and now the Taliban.