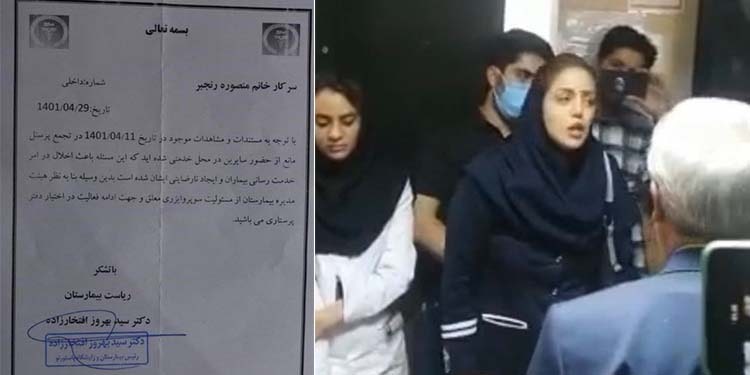 A nurse was dismissed from a hospital in the northeastern city of Mashhad after she participated in a peaceful protest over living conditions.

The state-run entekhab.ir reported on Sunday that in a letter from the head of Pastor Hospital, the supervisor of the hospital, Mansoureh Ranjbar, was dismissed from her position.

According to Entekhab, the letter came three weeks after Mansoureh Ranjbar participated in a gathering on July 2 to demand unpaid wages.

In a letter sent on July 20, Seyyed Behrouz Eftekharzadeh, suspended Mansoure Ranjbar from the supervisory role and placed her at the disposal of the nursing office.

Mansoure Ranjber, addressed the hospital officials at the gathering on July 2, saying, “Some of our colleagues lost their parents during the Coronavirus pandemic, but the Ministry of Health did not even spend 100 tomans for the treatment of the healthcare workers. Even though the personnel were dying, they paid for the treatment themselves.

In a separate interview with the state-run Khorasan newspaper, she criticized the illegal taxes levied on nurses, which was approved by the head of the Mashhad Medical System Organization.

In terms of educational technology and knowledge, Iran’s nursing is at levels with the world’s top countries. Unfortunately, however, the clerical regime does not comply with the human resources standards. The ratio of doctors, nurses, and hospital beds per the total population is miserable compared to world standards.

Nursing is a high-risk and harmful job. Nurses are exposed to stressors such as abnormal mental and physical conditions during their shifts; infection with pathogens and viruses such as Coronavirus, hepatitis, and AIDS; and exposure to radiation and carcinogens. Their job is completely different from that of an employee sitting at a desk. However, nurses do not have the opportunity to retire after 20 years of service. Under the mullahs’ rule, nurses are entitled to retirement after 25 years with a monthly wage of 25 workdays instead of 30 days. The pension law and the fact that nurses have not been paid their pandemic-era overtime earnings, nor their routine salaries and benefits, are among the primary reasons for the repeated protests of this hardworking group.

Horrifying rise in executions in Iran; 11 hanged in just one day