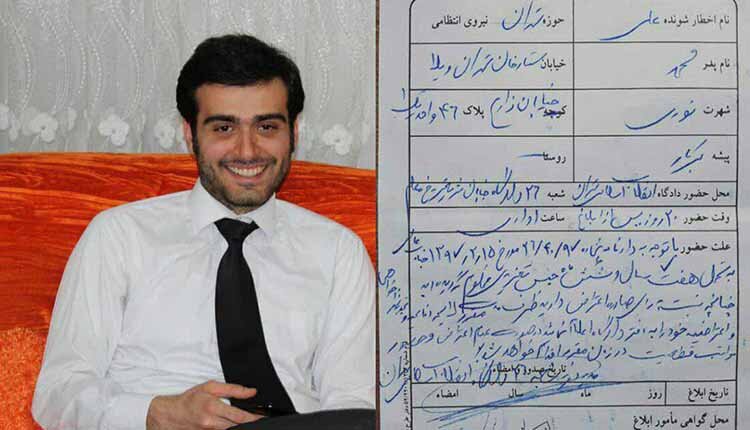 Civil rights activist Ali Nouri, has been sentenced to seven and a half years behind bars after being convicted of “assembly, collusion and spreading propaganda against the state” by the branch 26 of Tehran Court headed by Judge Ahmadzadeh. The activist published the news on his Instagram page, sharing a picture of the verdict.
Ali Nouri, 25, was first arrested on October 8, 2014, in a rally in support of Kobani held in front of the UN Offices in Tehran. He was then transferred to the Ward 2A of Tehran’s Evin Prison which is controlled by the Revolutionary Guard Corps (IRGC). After spending one-third of his conviction, he was conditionally released.
He was arrested again on December 30, 2017, and was taken to a quarantine section of Evin Prison where he suffered a heart attack and only received a quick check-up in the prison clinic. After a few days he was transferred to Rajaie Shahr Prison of Karaj, west of Tehran. Subsequently Mr. Nouri was temporarily released on bail on February 4, 2018 until his trial.