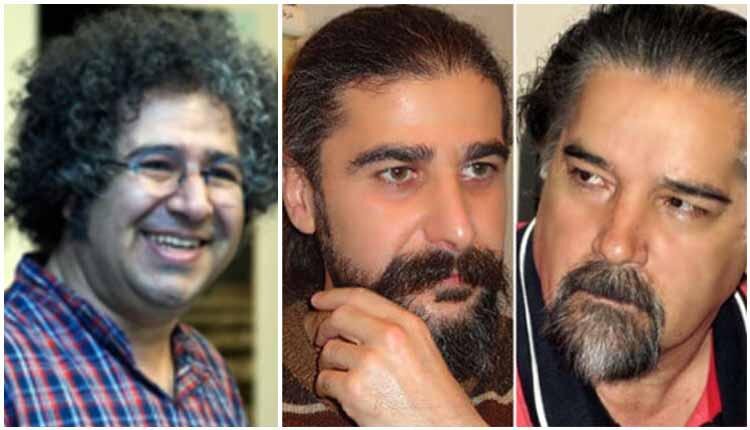 Three members of Iranian Writers Association (IWA) were arrested on Tuesday, January 22 after they failed to appear before the court and provide large bails.

According to reports judicial authorities have set unaffordable bails for Baktash Abtin, Reza Khandan Mahabadi and Keyvan Bazhan, which they could not afford.

n a Tuesday statement IWA strongly protested the decision made by judicial authorities to set such bails for three of its members.

They describe the roughly $240,000 bail set for the three as “unacceptable” and demanded their immediate release.

The judge set this abnormally large bail for the trio after rejecting their choice of lawyers, Nasser Zarafshan and Razieh Zaydi, which IWA described as a violation of the writers’ rights.

The IWA statement reads: “Immediately after rejecting the proposed lawyers, the judge raised the amount of bail tenfold, from one billion to ten billion rials, and ordered the suspects to personally defend themselves.”

The writers stand accused of “propaganda against the government”, “assembly and collusion” against national security, and encouraging corruption and prostitution among women, for their articles published in an “illegal” journal and the Free Thought internal news bulletin. They are being sued by the Ministry of Intelligence.

Abtin, a poet and filmmaker, was previously sentenced to three months of community service at the State Welfare Organization and a fine of roughly $1,200, for posting a photo on Instagram of Mazdak Zarafshan after he’d been injured by police.

In June 2018, Abtin said: “Mazdak’s face was badly bruised and he had broken cheeks and ribs. When I posted his photo on my Instagram, it got a lot of attention and it was widely shared on the internet. A few days later, I got a summons from the Revolutionary Court in Karaj for ‘propaganda against the state’.”

Zarafshan was injured in December 2016, after police tried to violently shut down a memorial service for Iranian authors who were murdered in 1998, in a series of killings of dissidents known as the “chain murders” This included at least two prominent IWA members, Mohammad Mokhtari, and Mohammad Jafar Pouyandeh.

Zarafshan is the son of prominent Iranian lawyer Nasser Zarafshan, who served five years for representing the families of the “chain murders” victims.

However, the trio is far from the only writers that have been targeted by the Iranian government recently.

Meanwhile, the state-run IRNA news agency reported on January 23, that another writer, Yashar Soltani, has been found guilty and sentenced to five years for reporting fake news and insulting state-run institutions.

Yashar Soltani’s lawyer announced on January 23 that his client has been sentenced to five years in prison for exposing extensive corruption within the Tehran municipality.

Branch 15 of the Revolutionary Court in Tehran also banned Soltani, the editor-in-chief of the independent Memari News, from leaving Iran or participating in political and media activities for two years, said attorney Sadegh Kashani.

Slow death of nurses in Iran under unbearable work pressure

1,800 children separated from their imprisoned mothers