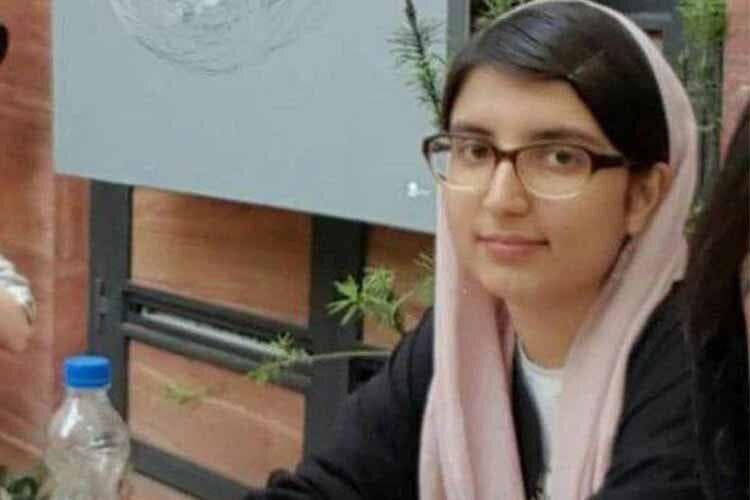 In her letter published on May 9, 2019, the stuent activist Parisa Rafiei revealed how she was pressured to take a “virginity test” in prison and then blocked from lodging a complaint against the inhumane practice.

The 21-year-old photography student, Parisa Rafiei was detained on February 28, 2018, by security forces in front of Tehran University and held in Evin Prison in Tehran for 21 days for allegedly participating in street protests.

In August 2018, Parisa Rafiei was sentenced by a preliminary court to seven years in prison, 74 lashes, a two-year ban on traveling abroad and prohibited from political and social activities for two years under the charges of “assembly and collusion against national security,” “propaganda against the state” and “disrupting public order.”

The student activist Parisa Rafiei is currently awaiting the result of her sentence appeal.

In her open letter the student activist Parisa Rafiei wrote:

Today, nearly a year and a half after the wave of detentions in January 2018 where hundreds of students as well as dozens of student activists and free-education activists were sentenced to flogging and imprisonment. We are still hearing the cries of student activists for justice but the forces of suppression have not decreased their pressures and attacks the slightest bit… I decided to write this letter knowing fully well that revealing such recollections can have dire consequences for those who make such revelations, affecting their ongoing legal and court proceedings.

But in light of the importance of defending the human rights of our student friends, journalists and thousands of political prisoners held in Iran, we cannot keep silent. We face a situation in which numerous dangerous restrictions, the possibility of being rearrested and the probability of continuation of repression have always hindered those arrested from revealing what they had lived through….

I am one of a number of independent student activists who has suffered from lack of transparency in regards to my case with justice and security officials. In regards to virtual indifference and silence of the media and public opinion to the catastrophic situation of the political detention centers in Iran, I would like to point out two different cases of abusive acts by the security forces during my own detention which shows how the security forces, the Ministry of Intelligence officials and IRGC intelligence division degrade and harass prisoners in particular female detainees. The use of violence along with psychological games for the purpose of forcing political activists to confess to their alleged crimes is rampant. (We have repeatedly witnessed officials threatening the political detainees with publishing their confessions.)

I hope that exposing these tactics will hinder the process of imposing these illegal and inhumane mechanisms by judicial and security forces. I hope that these revelations will help break the silence about the persecution by the repressive institutions and prevent further illegal and brutal acts and pressures on those detained on International Labor day and Teacher’s day.

1- During my entire detention (with the exception of the last two days that my bail was being considered), I was interrogated every single day. I spent 21 days in solitary confinement at a detention center without knowing the name of the place I was being held. This is one of most practiced and serious forms of inhumane tortures which must be confronted and eradicated. Aside from imposing a few days to several months of solitary confinement on the detainees, the issue that has to be addressed is that political detainees can be transferred to, and held in, anonymous detention facilities during their confinement. This is a problem that in addition to confusing the process of locating and pursuing a prisoner by their relatives, can have adverse psychological effects on the detainees.

Political detainees when not aware of their surroundings, through the use of blindfolds and other security measures, are much more vulnerable to threats during interrogation. Especially in cases where the interrogators grant the accused permission to contact their loved ones only if they cooperate. The prisoner is kept in a situation where she believes that no one is aware of her whereabouts even her own lawyer and has no way of contacting anyone seeking help and support. Independent experts and lawyers should also outline the wider dimensions of the effects of these secret detention centers so they can accurately critique and track the general status of those held in these detention centers.

2- In a totally unlawful action during my detention, my interrogator with the approval of the case investigator sent me to the medical examiner’s office on Behesht St. for a virginity test but I stood firm and despite threats and lots of pressure, they did not succeed. I insisted on lodging a complaint against this illegal request [of a virginity test] several times but the authorities refused and kept it quiet and said that “we did not want you to make a false claim against us.”

Probably what they meant is allegations of rape; allegations by me or other prisoners, even though that every inch of these detention centers is covered with security cameras this claim in itself is absurd as well.

Of course, the tremendous humiliation was not limited to the day I was sent to the medical examiner’s office.
The case investigator wanted to impose more psychological pressure by sending me so-called unofficial letters describing the place I was going to be held, without saying where it was, along with verbal threats of execution, beatings and even pulling out nails.
The reason I mention these details is that we should not think that the interrogators use just one tactic to extract the admission of guilt they are looking for and they continue the pressure until the psychological breakdown of the individual.

These inhumane and extrajudicial tactics using all types of dehumanizing threats and humiliations are applied to all detainees especially those whose arrest information are not publicized.

The increase in political arrests and the overwhelming repression of women who are politically and socially active compel us to ask: What does conducting a virginity test –which concerns a completely personal matter to the arrested women– has to do the with security apparatus and the content of the interrogation? Undoubtedly, the emergence of public sensitivities to stop these acts, which is a gross harassment of female prisoners violating their privacy and human rights, is more than necessary than ever.

P.S. My emphasis on political defendants in this letter does not mean that I prioritize them over regular detainees, but because of my personal experience I had become more aware of their situation.