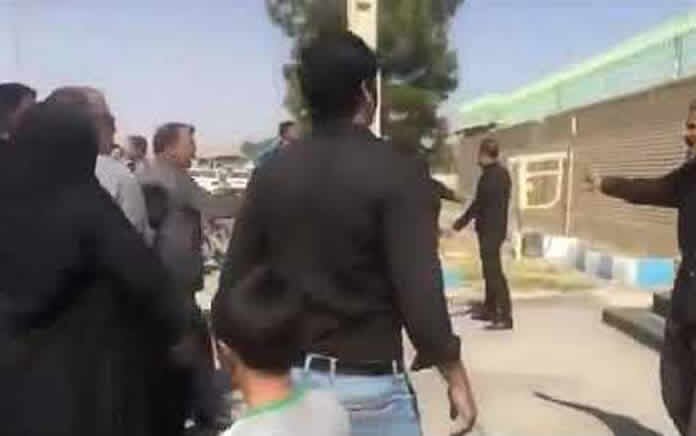 Reports indicate the state security forces picked up Javad Khosravanian from his home in Khorrambid of Fars Province on Friday, August 30, 2019.

The officers of the local intelligence department tortured him to death while in detention and handed over his body to a local hospital.

The agents then took him to the hospital, however, according to the medical staff in emergency department, he was dead before being taken to the hospital.

A video clip on the Internet shows clear signs of torture on the victim’s head and neck.

Other videos showed locals shouting and protesting the death of Javad Khosravanian under torture. They hold placards demanding justice.

Khosravanian’s death has highlighted the treatment of prisoners in Iran.

Javad Khosravanian is not the first person to die in Iran’s prisons.

Iranian authorities have a horrifying record of subjecting detainees to torture and other cruel, inhuman or degrading treatment, often in order to extract forced confessions.

Most recently, a 28-year-old detainee identified as Benyamin Alboghbiesh from the Ahvazi Arab minority, was reportedly tortured to death in a detention center in Ahvaz, in southern Iran. Alboghbiesh was arrested on 26 May. Just a month later, on 26 June, his family were informed by an intelligence official believed to be affiliated with the Revolutionary Guards that he had died at a detention center.

During protests that erupted in December 2017, dozens of prisoners were tortured to death in Iranian prisons with the regime claiming that they were drug addicts or had committed suicide.

Back in 2009, after the disputed presidential election several activists and protesters died in jail, including at least five confirmed to have died in Kahrizak Detention Center in southern Tehran.

Many protesters are believed to have been tortured to death in Kahrizak, and several claim to have been raped. An Iranian doctor who examined the victims of Kahrizak was suspeciously died a few months later on November 10, 2009. His death was never investigated despite a lawsuit brought by his family.