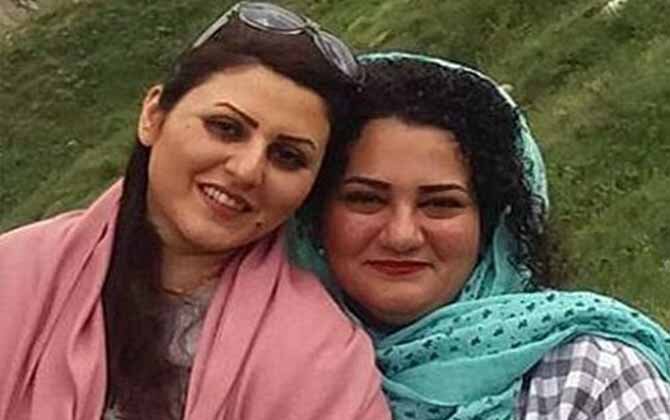 Tehran Appeals Court upheld a 3 years and 7 months sentence against Golrokh Ebrahimi Iraee and Atena Daemi on the charges of “insulting the supreme leader” and “propaganda against the state.”

They will serve 2 years and one-month in prison as only the harshest of multiple sentences will be enforced, according to the Article 134 of Iran’s Islamic Penal Code, which requires defendants to serve the maximum punishment for the charge that carries the longest sentence in cases involving multiple sentences.

On June 18, 2019, the Branch 26 of the Revolutionary Court in Tehran presided by Judge Iman Afshari examined a new case filed against Golrokh Ebrahimi Iraee and Atena Daemi for writing open letters criticizing prison conditions, condemning the executions of political prisoners including Ramin Hossein Panahi, Zanyar Moradi and Loghman Moradi and for singing the revolutionary anthem “Oh Martyr” in honor of the executed prisoners, which the court said was an insult to Supreme Leader Ali Khamenei.

The court sentenced Golrokh Ebrahimi Iraee And Atena Daemi to 1.5 years in prison on the charge of “propaganda against the state,” and to 2 years and 1 month for “insulting the leader (Ali Khamenei).”

Amir Raissian, lawyer of Golrokh Ebrahimi Iraee, told the press on September 5, 2019, that the same verdict had been upheld in the revision stage without being examined by the Revision Court.

She was arrested on October 21, 2014 and sentenced to 14 years in prison on March 14, 2015, on charges of “propaganda against the state”, “association and collusion against nationl security”, “insulting the leader”, and “hiding the evidence of crime.”

Atena Daemi was freed on February 15, 2016, after serving 16 months and her sentence was subsequently decreased to 7 years.

But she was violently re-arrested on November 26, 2016, and taken to Evin Prison to serve her sentence.

Golrokh Ebrahimi Iraee was arrested by the Revolutionary Guards Corps (IRGC) Intelligence on September 6, 2014, along with her husband and two other activists.

She served three months in the IRGC Intelligence Ward 2A in Evin and subsequently released on September 27, 2014, on an 80-million toman bail for her activities in the Facebook. Then, she was sentenced to 6 years in prison on charges of “insulting the sanctities” and “propaganda against the state.”

On October 24, 2016, her residence was stormed by security forces and she was taken to Evin Prison to serve her sentence primarily for writing an unpublished story about the practice of stoning.

Her husband, Arash Sadeghi went on hunger strike in protest, and after 72 days, Golrokh Ebrahimi Iraee was released on January 3, 2017.

On January 22, 2017, Golrokh Ebrahimi Iraee was arrested again as she was leaving home and heading for hospital where her imprisoned husband was supposed to be examined.

In March 2017, her sentence was reduced by 30 months as part of a Nowrooz (Iranian New Year) pardon.

She was released in April 2019 after serving 3.5 years in prison.