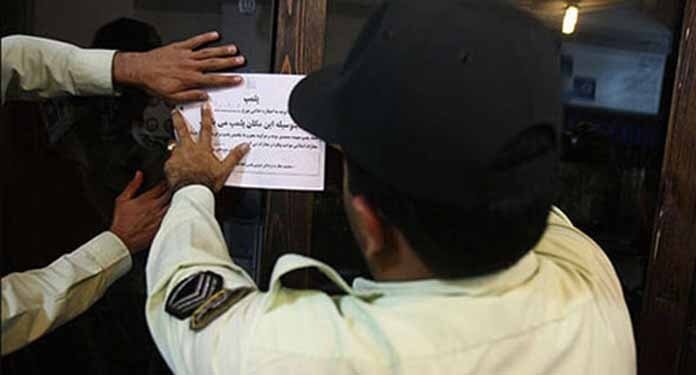 Iranian authorities have shut down, sealed and reprimanded thousands of stores and restaurants during Ramadan despite the growing economic and unemployment crisis aggravated by the Coronavirus outbreak.
Media reports indicate that this year mass restaurant-closures during Ramadan happened in various cities across Iran. Most store owners had just recently opened their shops after the regime lifted coronavirus regulations.

A police official in Markazi Province said that 22 shops have been sealed shut, and 36 others receiced warnings for what he described as “failure to observe the rules of Sharia during Ramadan”.

Javar Parvizi who was cited by the state-run Mehr news agency on May 21 said that 25 the shop owners were referred to the judiciary and lawsuits were filed against them.

Meanwhile, a police chief in Lorestan said 284 restaurants were shut down and sealed on the first twenty days of Ramadan, the state-run ISNA news agency reported on Monday, May 18.

Haji Mohammad Mehdiannasab said that the police have issued warnings to 1.784 shops and restaurants.
Mehdiannasab said on May 18 that the police had shot down 284 stores and that 684 shop owners were forced to give pledges while 453 others received shutdown warnings. He said that 46 individuals have been arrested for eating or drinking in public during fasting hours.

In another development, police Spokesperson Ahmad Nurian said on May 10 that the police had reprimanded more than 52,000 shops during the first half of Ramadan and that 13,343 shop owners were forced to give pledges to “follow Ramadan customs”. In addition to this, 8,257 stores received warnings.

Nurian said that 3,438 stores were sealed shut during this period and that lawsuits had been filed against some of the owners.
The Police Spokesperson said that the reason behind the crackdown was “non-compliance with religious norms” and because locals were eating inside and outside these shops.

In Gilan, the head of Location Supervision Police said that the police inspected 2,909 shops in the first 10 days of Ramadan.

“112 shops were sealed shut and prevented from further activity for not following Sharia law”, Mehdi Najafipour added in comments carried by the state-run IRNA News Agency.

The head of police in Dezful said that 10 stores were closed while 12 stores were forced to commit themselves to observe Sharia law.