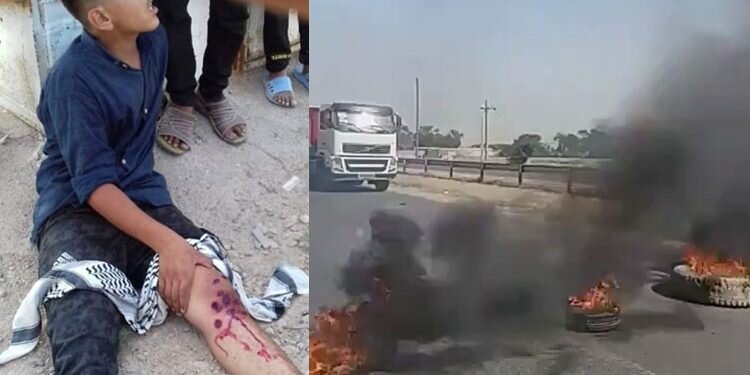 Security forces attacked and fired tear gas and rubber bullets into locals who were protesting the lack of drinking water in Iran’s oil-rich Khuzestan province.
According to local reports, running water in Gheizaniyeh district has been cut off by local officials in the past few days.

The residents of Gheizaniyeh rural district in the city of Ahvaz in Khuzestan Province initially gathered in front of the district-governor’s office on Saturday, May 23, and then blocked the Ahvaz- Gheizaniyeh road with burning tires, to protest the cut-off of drinking water in the area.
In one of the videos published online, an angry man cries out that he has not taken a shower for 10 days.

The protesting residents met with force by security forces and Special Unit police who fired tear gas to open the road, according to the state-run Mardomsalari Website.

Local sources reported that a few people, including a teenager, were wounded after being targeted with rubber bullets and pellet guns.

May 23 – Gheyzaniyeh, SW #Iran
Security forces fired tear gas and rubber bullets into a crowd of locals who were protesting lack of drinking water in their district.
Two protesters were arrested after being beaten. #IranProtests pic.twitter.com/MBRRPIcxfu

IRNA cited the Chief of Police of Ahvaz as saying that the protesters were suppressed because they broke the law and must “seek solutions through legal means”.
But locals say that their previous protests and requests were left unanswered.
“Several people from Gheizaniyeh in Ahvaz closed off the Ahvaz-Ramhormoz-Omidieh road to protest the negligence by officials in providing their drinking water… and the police entered the scene to prevent this,” Mohsen Dalvand told IRNA.

The Colonel said that locals initially threw stones and pieces of wood at the police and that two police officers sustained head injuries.

“The Police used pellet guns and rubber bullets and two protesters who were slightly injured were arrested,” he said adding that the injured locals “did not have any problems”.

The oil rich Gheizaniyeh Rural District lacks the most basic of facilities and infrastructure.

Mardomsalari’s website says water shortage is a chronic problem in Gheizaniyeh district, with 83 villages and more than 25,000 population.