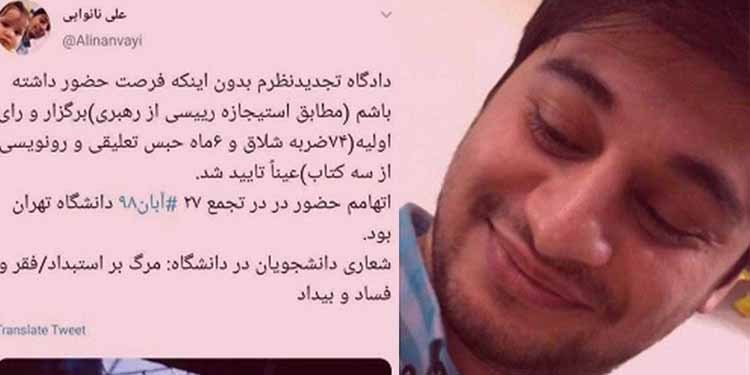 A Tehran Appeals Court upheld without a hearing the verdict for an Iran protester.

Ali Nanvaei, a Tehran University student, was arrested by Intelligence Ministry agents on November 18, 2019 as he was leaving school and taken to an undisclosed location.

The preliminary court examined Mr. Nanvaei’s case on February 4, 2020 on the charge of “disruption of public order” and sentenced him to a six-month prison term suspended for two years, 74 lashes, and handwriting of the texts of three books designated by the court.

The preliminary court ruling was upheld by the Appeals Court without any hearing, citing the permission obtained by Judiciary Chief Ebrahim Raisi from the mullahs’ Supreme leader, Ali Khamenei.

Massive protests erupted across Iran on Friday, November 15, 2019 after the Iranian regime’s abrupt announcement that it had tripled the price of fuel.

Mohammad Javad Kol ivand, a member of parliament from Karaj, said protests broke out in 719 locations across the country, on Friday, November 15.

Also on November 25, 2019, Seyed Hossein Naghavi, spokesman for the parliamentary Foreign Affairs and Security Committee, revealed that 7,000 people had been arrested during the protests in November 2019.