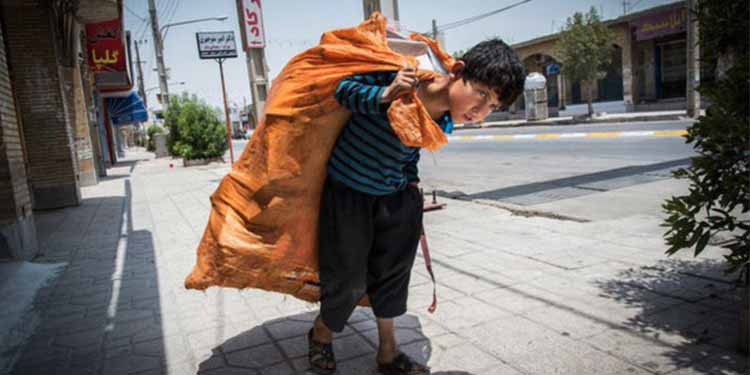 The International Labor Organization has declared June 12 as the World Day Against Child Labour to raise awareness and work to prevent child labor.

The COVID-19 pandemic and the regime’s mismanagement of handling the crisis, have had a huge impact on people’s lives and livelihoods.

The crisis has pushed a significant number of children into child labour in Iran.

Already, there are an estimated millions of children in child labour in Iran, many of whom are engaged in dangerous trades or working in hazardous environments.

There are no exact statistics of how many labour children can be found in Iran. Child rights activists put the number of child laborers at millions, but the officials provide far fewer figures.

Iran’s state-run media have in recent years published various reports on the scale of the catastrophe and pointed out the “growing population” of child laborers in Iran.

In September 2017, Nahid Tajuddin, a member of the Presidium of the Social Commission of the Parliament, estimated the number of working children in Iran at between 3 and 7 million emphasizing that “because most working children do not have any identity registration, accurate statistics cannot be provided.” (The state-run Salamat News website – September 27, 2017).

Studies show that with the outbreak of the coronavirus and, some poor families who have lost their jobs have sent their children to the streets to earn money.

In a recently published report, the state-run Hamshahri daily spoke with 25 working children in west of Tehran, which can be a small example of the whole child laborers in Iran.

Eleven of these children said that they had started working in streets as peddlers or waste pickers since the outbreak.

According to these children, their parents were mostly working in the service sector or were daily rate workers who have lost their jobs since the outbreak. For example, they worked as motorbike delivery men, carwash workers, construction workers, peddlers and waiters.

In the first months of the coronavirus outbreak, when everyone had to stay home, a heartbreaking video was shared online showing a 6-7-year-old child laborer working in the street.

When asked what he is doing out on the street during the Covid-19 epidemic, the little boy said he is trying to make money because “we’re starving at home and don’t have rice and oil”.

These children, regardless of hygiene and wearing gloves and masks, are only thinking of providing for their family’s basic needs, which are sometimes a piece of bread.

Child laborers are at risk of coronavirus due to their type of work, malnutrition, lack of access to health facilities and lack of adequate shelter.

But they say they can’t stay at home because “hunger is more deadly than the virus.”

Child rights activists have released videos containing conversations with working children who work in crowded places without any protective equipment.

Asked if they knew what coronavirus was, children said: “Hunger is worse than coronavirus. “The virus kills one of several people, but hunger kills everyone.”

Mina Jandaghi, a children’s rights activist says that waste picker and peddler children who work on the street or in the subway, without masks and gloves, move in the city, have poor nutrition and their place of residence is next to the garbage.

“On the other hand, these children are more vulnerable to the disease due to the type of their nutrition, insufficient rest and exposure to all kinds of stress and psychological pressure,” the state-run ILNA news agency quoted the activist as saying. “These children will not be able to go to medical centers due to the high cost of treatment and the problems of accepting children without ID cards.”

Even before the coronavirus outbreak, these children were exposed to a variety of diseases.

Research shows 45% of child laborers in Iran and those living on the streets are suffering from illnesses such as AIDS, hepatitis, and others. These children are also known to be suffering from malnutrition, being short, low weight, skin illnesses and psychological disorders.

Many such children work at least 6 hours a day and do not eat even a single decent meal, providing the grounds for these children to obtain even more illnesses.

Many these children are seen carrying heavy loads and begin suffering from back problems at a very early age. And since they have no access to medical care, such an illness paves the path for even more problems further down the road.

Despite enduring all this suffering these children only receive one fifth of a normal worker’s salary. However, a long slate of risks continuously threatens their lives. If they suffer any injuries, there is no entity willing to provide any support at all.

Government inaction in addressing the situation of child laborers

Despite this situation, the regime has no practical or effective plan to organize child laborers, and “the problem of working children is not one of the regime’s priorities.” (The state-run IRNA news agency, June 1, 2020)

Lack of allocating “sufficient budget” is another reason for the inaction of the regime and the situation of working children in Iran. (The state-run Khaneh Melat Website – July 14, 2019)

On the other hand, the government and the state media usually try to tie the fate of these children to the actions of large mafia groups.

However, according to credible reports and statistics from official and unofficial sources, most of these children have families.

They are mostly forced to drop out of school to work and earn a living for their younger siblings or their unemployed or addicted parents.