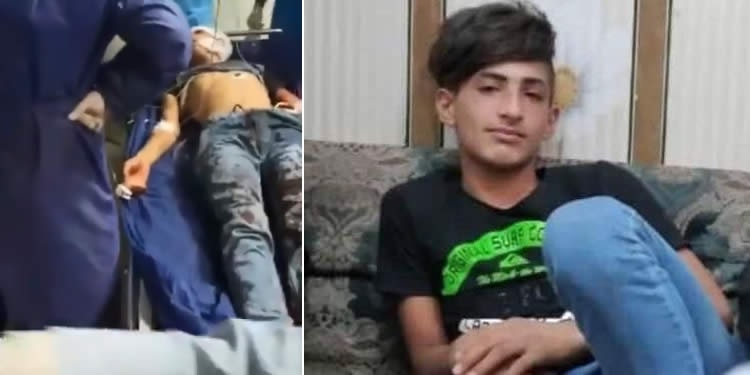 15-year-old Omid Eidani was shot and killed by the state security forces in the city of Omidyeh in Khuzestan Province.

The state security forces killed a 13-year-old boy in the city of Omidiyeh in Khuzestan Province of southwest Iran.

The agents shot Omid Eidani in the head because he confronted them when they tried to arrest his brother on Monday July 7.

He died at the hospital hours later due to the severity of his injuries.

The state-run media tried to justify the deliberate shooting and described the teen and his friends as rioters, quoting Mehran Rafei, regime governor of Omidiyeh, as saying: “The police of Omidiyeh had arrested a rioter in the town of Yasser in Omidiyeh and some of his friends who were thugs engaged with the police to help the suspect escape.”

The official claimed: “These people attacked the police with stones and clubs and injured some of them and the police and emergency vehicles were damaged, and the suspect escaped from the police.”

The governor of Omidiyeh downplayed the fact that the state security forces had opened fire at protesters and said: “to calm the people of the area the police fired air shots and one of the attackers who was in the roof of one the houses and had throwed stones to the police was hit and transferred to the hospital.”

The people of Omidiyeh in Khuzestan are part of the Arab minority of Iran and are suppressed by the Iranian regime.
Khuzestan is an oil-rich province of Iran, but its people are living in utter poverty.

This is the third reported killing of Arab citizens by the state forces in just the past 10 days which indicate the use of lethal force by Iran’s security forces without due process which amounts to arbitrary killings.

Mohammad Savari, 30, a resident of Hoveyzeh City in Khuzestan Province, was shot dead by the IRGC border regiment forces on Thursday, July 2, while transporting several sheep on the border road between Iraq and Hoveyzeh. He was severely wounded in the back by three bullets.
Mohammad Savari who was a father of two, was then taken to a hospital in Ahvaz and died on the evening of Friday, July 3.

In another development the state security forces shot and killed Reza Tarfi after he failed to stop at a police checkpoint on June 28. His family filed a complaint against the agents. But, they were pressuree by the intelligence forces to stay away from the press and human rights organizations.