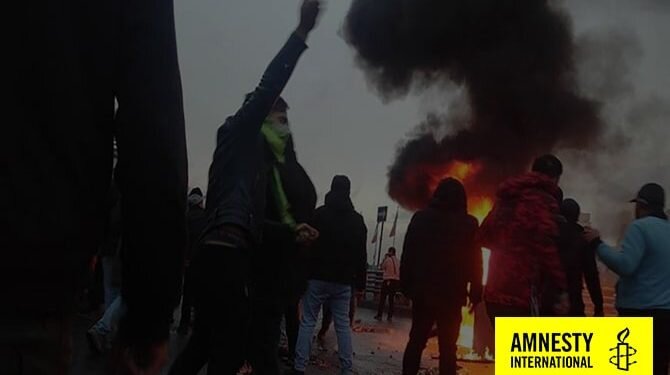 Trampled Humanity is the product of research involving in-depth interviews with 60 victims of arbitrary arrest, enforced disappearance, torture and other ill-treatment or their relatives or close acquaintances; two protesters who were in hiding; and 14 other informed individuals; information received through written messages from several hundred others inside the country and analysis of video footage, official statements and court documents, Amnesty International said.

Diana Eltahawy, Amnesty International’s Deputy Regional Director for the Middle East and North Africa, said, “In the days following the mass protests, videos showing Iran’s security forces deliberately killing and injuring unarmed protesters and bystanders sent shockwaves around the world. Much less visible has been the catalogue of cruelty meted out to detainees and their families by Iranian officials away from the public eye.”

In another part she added, “Instead of investigating allegations of enforced disappearance, torture and other ill-treatment and other crimes against detainees, Iranian prosecutors became complicit in the campaign of repression by bringing national security charges against hundreds of people solely for exercising their rights to freedom of expression, association and peaceful assembly, while judges doled out guilty verdicts on the basis of torture-tainted ‘confessions’.”

Diana Eltahawy further emphasized, “This litany of crimes and violations, committed with total impunity, has been accompanied by a wave of forced televised ‘confessions’ in state propaganda videos and grotesque statements from top officials who have praised intelligence and security forces as heroes for their role in the brutal crackdown.”

Torture was used to punish, intimidate and humiliate detainees. It was also routinely used to elicit “confessions” and incriminating statements, not just about their involvement in the protests, but also about their alleged associations with opposition groups, human rights defenders, media outside Iran, as well as with foreign governments.

The victims were frequently hooded or blindfolded; punched, kicked and flogged; beaten with sticks, rubber hosepipes, knives, batons and cables; suspended or forced into holding painful stress positions for prolonged periods; deprived of sufficient food and potable water; placed in prolonged solitary confinement, sometimes for weeks or even months; and denied medical care for injuries sustained during the protests or as a result of torture.

Other documented methods of torture included stripping detainees and spraying them with cold water, and subjecting detainees to extreme temperatures and/or bombardment of light or sound; forcible extraction of the nails from fingers or toes; pepper spraying; forced administration of chemical substances; using electric shocks; waterboarding; and mock executions.

As for enforced disappearances, Amnesty International’s research shows that many detainees were subjected to enforced disappearance for weeks or even months while held in undisclosed locations run by the security and intelligence bodies including the ministry of intelligence or the Revolutionary Guards. Other detainees were held in overcrowded prisons or police stations, military barracks, sports venues and schools.

Distressed relatives told the organization that they visited hospitals, morgues, police stations, prosecution offices, courts, prisons and other known detention centres to enquire about the fate or whereabouts of their loved ones, but the authorities refused to provide them with information and threatened them with arrest if they kept seeking information or publicly spoke out about them.

According to Amnesty International sources interrogators and prison officials perpetrated sexual violence against male detainees, including through stripping and forced nakedness, sexual verbal abuse, pepper spraying the genital area, and administering electric shocks to the testicles.

Trampled Humanity cites one victim from Khorasan Razavi province who was subjected to waterboarding. He told Amnesty International: “They [my interrogators] would drench a towel in water and place it over my face. Then they would pour water slowly over the towel, which made me feel like I was suffocating… They would stop… until I started to feel better and then they would start torturing me this way again. They also punched, kicked and flogged me on the soles of my feet with a cable.”

The state security forces used excessive force against protests that emerged in November 2019 after an abrupt government increase in fuel prices across Iran.

At least 1,500 protesters including children were killed amid an internet blackout during the crackdown.

The Iranian regime has sentenced many protesters to heavy prison terms, lashes, and even death to prevent further protests.