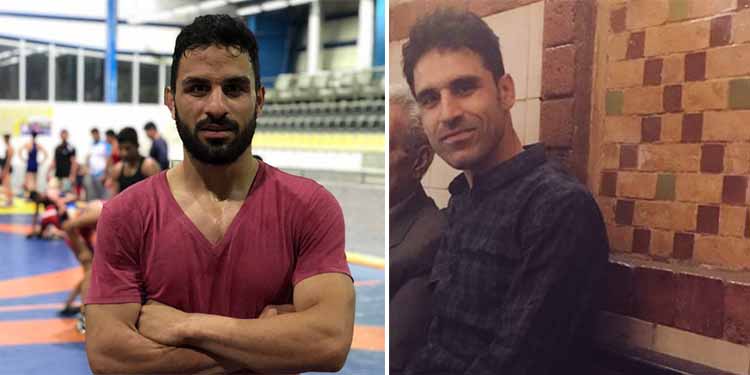 As a 21st century human being, I do not know how to defend myself. I am innocent!

Following the unfair sentences issued for three brothers who had participated in protests in Shiraz in 2018, Navid Afkari and his brother, Vahid, have sent letters and tape recordings out of prison, revealing their tortures at the hands of their interrogators.

Navid and Vahid Afkari are accused of killing an agent of the Water and Sewage Department for participating in quelling the protests. This is a charge which both of them have rejected and pleaded not guilty. However, their pleas fell on deaf ears.

Navid Afkari: Looking for another head to hang from their noose

Navid Afkari has been sentenced to double death penalties, 6.5 years in prison and 74 lashes.

Twenty-seven and a wrestling champion, Navid Afkari in an open letter from detention described how he had been tortured in the Detective Office and the detention center of the Department of Intelligence of Shiraz:

“They put a plastic bag over my head and almost suffocated me. Using batons and other hard objects, they beat hard on my hands, abdomen and legs. They used foul language and insulted me frequently. They tied me tight and poured alcohol down my nostrils.”

Navid Afkari said he had to commit suicide under the pressure of psychological and physical torture. He has file a request with the First Penal Branch of Fars Province to investigate the tortures he had been subjected to. Nevertheless, the Supreme Court upheld his verdict and turned down his appeal.

Navid Afkari has also sent out a tape recording in which he has said: “Ever since I stepped foot on the wrestling mattress, one thing I learned was to stand up to oppression and lies… When I got relieved of the pressure of solitary confinement the basement and the tortures, and arrived in prison, I immediately wrote to various judicial authorities, complained and cried out that ‘I was not a criminal murderer.’ I asked to be examined by the Coroner’s Office. The doctor at the Coroner’s Office and other eyewitnesses confirmed that I had been tortured. In my defense bill, I wrote that my confessions had been made under torture. There is not a single reason or document in my case to indicate that we are guilty. But they did not want to hear our voice. Then, I learned that they are looking for another head to hang from their noose.”

Vahid Afkari: I am innocent!

Vahid Afkari also sent out a video recording saying that he had been viciously tortured and did not have any chance to defend himself in the court.

The audio recording by Vahid Afkari was distributed online on August 31, reviewing the manner of his being arrested, his time in solitary confinement, his tortures and trial.

In a letter from prison, Vahid Afkari had declared his innocence. Nonetheless, he said, his torturers and the presiding judge did not heed his statements and convicted him.

Vahid Afkari said, “No one listened to me over the past two years.”

He went on dry hunger strike for 20 days to have his voice heard, but it was useless. So, he committed suicide may be he would be heard. He was in coma for three days, and yet, he was not heard. Vahid Afkari has appealed to the people of Iran for help: “I have no way but logic and law. I have no other option. How can I tell people that I am innocent? The people of Iran, I am innocent!”

Manner of arrest and torture

They arrested at home and took me away while I was blindfolded and handcuffed. They threw me in a solitary cell where I could not understand the change of day and night. I could hardly fit in to sleep. The next day, they took me to a person who later I found out to be the interrogator. While still blindfolded, he asked where I was on August 2, 2018, at 11.30 p.m. I said no one remembers where he was even a week ago. How could I remember a month and a half ago?

I spent days and weeks in solitary confinement. Based on the papers in my case, I did not sign any papers neither in the Detectives’ Office neither in the courthouse. Although they swore at me and tortured me, I did not give in. They arrested my father and my brother-in-law and threatened to arrest the rest of my family. But no one listened to me when I said I was innocent.

Right or wrong, I decided to kill myself, may be in this way, someone would hear me. May be, at least Navid would get out of this predicament.  After 20 days of dry hunger strike, I broke a glass and cut my neck. I opened my eyes in Namazi Hospital after three days in coma. Again, nobody heard my voice.

I was subsequently transferred to the Detention Center of the Intelligence Department where I endured various forms of torture since the moment I arrived. They covered my head with a plastic bag and tied it tightly. After one minute, they opened it, and again tied it.

As my limbs were chained, they hit me with shockers. They hung me upside down and hit the soles of my feet by batons. Then they forced me to walk on my feet, so that the bruises would not remain.

They fetched my diary from home and brought it to the interrogation room, read out the very private parts. They threatened to arrest my mother and sister if I did not write what they dictated.

The judge only ridiculed me

The family of the murder victim denied knowing us from the outset.

The judge presiding the court was Mehrdad Tahamtan. He asked me: Do you accept the charge of complicity in murder? I said: How could I defend myself when I don’t know anything about the case. If someone claims to have seen me at a time and place where the murder took place, please show him to me. If you could track my mobile in the place of murder, you should present your document. If the image my car in or near the place of murder has been recorded by a person or by cameras, you should let us know. If you have discovered the weapon by which the murder was committed in our home, then show it to us. If you have discovered any evidence of crime in our belongings and home furniture, you should present them!

No doubt, there are no such evidence because we are innocent.

Then the judge started staring at me.

Then I told him that I have witnesses who can testify that I was not in the place of murder at the time it was committed, despite the fact that you do not have any documents indicating that I had committed a crime. You have detained me for two years while I was innocent.

I spoke out but I did not receive any answers except ridicule. The judge kept asking me, “Do you accept your charge?” And he repeated it on and on.

I asked verbally and in writing, for the media to be present during our trial and film the proceedings, but the Judge said these are just protocols. I do not deem it right to have the trial proceedings filmed.

I ask you, the people, why did they always disagreed with our trial being filmed?

I swear to my dignity, to my humanity, that I am innocent. My case is there. It does not contain and it will never contain any document against me, because I am innocent.

Today, the values of dignity have been distorted. To show that they are protecting security, they arrest innocent people without having any documents against them. They try and sentence them without evidence. They take their lives away from them and even worse, they execute them.

As a 21st century human being, I do not know how to defend myself despite this long civilization? How could I ask people to help me? I have no way but logic. I have no option except the law. I have no other option.