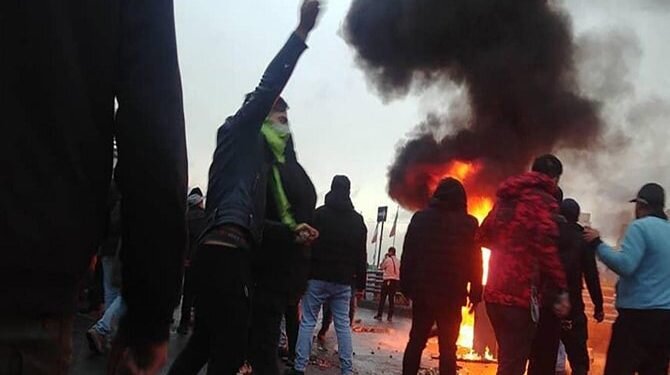 In order to prevent any protests and uprisings, the Iranian regime has targeted its protesters and opponents and is trying to stifle any dissent by issuing heavy sentences.

In recent months, regime officials have officially warned in the state media that nationwide protests, far more widespread than in December 2017 and November 2018, are very likely. The evidence shows that the regime has relied heavily on repression to contain the explosive atmosphere of society.

Participants in the peaceful protests face heavy prison and floggings sentences, and even executions.

Eyewitnesses and former detainees have told shocking stories of violence during detention.

Many of them have been interrogated in solitary confinement without the possibility of contacting their families or lawyers and have been tortured to make a televised confession.

The present report is a brief look at the brutal death sentences, floggings, and imprisonment of those arrested in various cities in Iran solely for exercising their right to freedom of expression.

At least 34 political prisoners and prisoners of conscience are currently on death row in Iran. Among the prisoners are 10 people detained during the nationwide protests.

Two of the protesters detained during the nationwide protests were recently executed.

Mostafa Salehi, one of the detainees of the December 2017-January 2018 protests, was executed at dawn on August 5, 2020 in Dastgerd Prison in Isfahan.

Navid Afkari Sangari, 27, was executed on September 12, 2020 in Adelabad Prison of Shiraz. He and his two brothers, Vahid and Habib, were arrested in connection with the August 2018 protests in Kazerun and Shiraz.

He had been given two death sentences for participating in the August 2018 protests. In addition, he was sentenced to six years and six months in prison and 74 lashes.

Mostafa Salehi and Navid Afkari were severely tortured in prison to make false confessions against themselves.

The death sentences of Amir Hossein Moradi, Saeed Tamjidi, and Mohammad Rajabi, three citizens arrested during the 1998 nationwide protests, were upheld by the Supreme Court on July 25, 2016.

The three detainees were denied access to a lawyer during interrogations and are said to have been tortured during that period. Amir Hossein Moradi says he was forced to make “confessions” that were broadcast on state television. These confessions have been used as evidence to convict the prisoners in court.

Hossein Reyhani is another one of the detainees of the November 2019 protests. He is 33 and used to live in Islamshahr, Tehran. He was arrested in December 2019 and charged with sending a text message during the protests. The court charged him with moharebeh. The Revolutionary Court of Islamshahr has sent his case to the Supreme Court for a final decision. Attribution of Moharebeh to this political prisoner by the Revolutionary Court of Islamshahr may lead to a death sentence for him.

In March 2020, the Second Branch of the Revolutionary Court in Isfahan sentenced five prisoners to death. Hadi Kiani, Mehdi Salehi Qaleh Shahrokhi, Mohammad Bastami, Majid Nazari Kondari and Abbas Mohammadi had been detained during the December 2017 protests. These five prisoners are being held in Dastgerd Prison in Isfahan.

Mohammad Keshvari, son of Hamid from Khorramabad, is one of the detainees of the November 2019 protests in this city. He was sentenced to death by the Revolutionary Court on June 28, 2020 and is currently being held in Khorramabad Prison.

Although Article One of the Convention against Torture and Other Cruel, Inhuman or Degrading Treatment or Punishment defines flogging as torture.

Number of people sentenced to flogging: 28

Protest detainees in Iran are subject to harsh punishments and heavy sentences.

In this regard, 28 of them were sentenced to flogging by the regime’s judiciary, for a total of 1,270 blows.

Navid, Vahid, and Habib Afkari Sangari, three brothers who were detained during the August 2018 protests, were tried separately by the Revolutionary Court and the Shiraz Criminal Court and eventually sentenced to death, flogging, and imprisonment.

Navid Afkari Sangari was sentenced to two death sentences, six years and six months of prison, and 74 lashes for alleged murder of a security agent among other charges.

Ali Azizi and Aliyar Hosseinzadeh, two citizens detained during the nationwide protests in November 2019, were flogged on Monday, June 8, 2020. These citizens were convicted by the Urmia Criminal Court.

The death sentences of Amir Hossein Moradi, Saeed Tamjidi and Mohammad Rajabi, three citizens arrested during the protests on November 2019, were upheld by the Supreme Court. These individuals were sentenced by the Tehran Revolutionary Court to 222 lashes and execution.

Morteza Omidbiglou, one of the detainees of the November 2019 protests, was sentenced by the Revolutionary Court of Tehran to 14 years in prison, 222 lashes and 3 months of free service as a hairdresser for 4 hours a day in the State Security Force’s Special Court.

Mohammad Eghbali Golhin, a citizen arrested during the November 2019 protests, was sentenced by Branch 10 of the Shahriar Criminal Court to 11 years in prison, 74 lashes and one year in exile in Rusk.

Fatemeh Kohanzadeh, one of the citizens arrested during the 40th anniversary of Pouya Bakhtiari, one of the victims of the November 2019 protests, was sentenced by the Karaj Revolutionary Court to one year in prison and two years of cleaning service in a Karaj Hospital.  She was also sentenced by the Karaj Criminal Court to six months in prison and a suspended flogging sentence of 50 lashes for “disturbing public order.”

Six juveniles detained during the November protests, namely Mohammad Reza Heydari, Amir Bavi, Jabbar Fuji, Ali Akbarnejad, Reza Akbarnejad and Salar Fuji, were tried by the Shiraz Criminal Court and received a total of 468 lashes, fines and alternative sentences to imprisonment such as doing unpaid public services. Two of them were sentenced to a total of six months in prison.

Meysam Jolani, a Turkish (Azerbaijani) activist and one of the detainees of the November 2019 protests, was sentenced in absentia by the Ardabil Criminal Court to 6 months in prison and 74 lashes.

Siavash Norouzi, a graphic design student at Shiraz University and one of the detainees of the January 2020 protests, was sentenced by the Shiraz Revolutionary Court to seven years in prison. In the other part of his case, Norouzi was sentenced by Branch 101 of the Shiraz Criminal Court to one year in prison and 74 lashes.

Ayyoub Shiri, one of the detainees of the November 2019 protests, was sentenced by the Tabriz Criminal Court to one year in prison and 74 lashes.

Fatemeh Davand, a political prisoner who had previously been sentenced to a total of five years and five months in prison and 30 lashes in separate sentences in Bukan and Mahabad, was arrested and transferred to Urmia Prison to serve her sentence. The forced confession of this Bukani citizen was broadcast on Channel 2 of the state television a few days after her arrest during the November 2019 protests.

There have been numerous letters and shocking reports from inside Iranian prisons, as well as by former prisoners, indicating that detained protesters have been tortured to make false confessions.

Mostafa Salehi, who was executed in on August 5, 2020, was tortured and harassed during interrogation.

He spent eight months in solitary confinement in the Intelligence Ministry’s prison in Dowlat-Abad and another five months in solitary confinement in Isfahan’s Dastgerd Prison. He was handcuffed and chained on his legs and confined to his solitary cell without a mattress and a blanket. He had no visitation rights for 14 months and was given only a small piece of bread as daily food allowance.

The interrogators broke his limbs and teeth under torture. They severely damaged his neck and spine to force him into cooperating with the Intelligence Ministry and accept to make false televised confessions. But despite the pressure and torture, he kept saying, “I am innocent!”

Navid, Habib and Vahid Afkari were severely tortured after their arrest to testify against each other. So much so that Vahid Afkari committed suicide twice in prison under these tortures.

Navid and Vahid Afkari had stated in audio files from Shiraz prison that their confession had been made under torture. In another audio file released as part of Navid Afkari’s trial, he says that there is a forensic report on his torture and that he has a witness for his claim.

The judge presiding this case, however, rejected his request to summon the witness to his torture in Detective’s Office of Shiraz, saying: “There is no need. If the court finds it necessary, it will examine the case.”

Amir Hossein Moradi, Mohammad Rajabi and Saeed Tamjidi protested in all of their trials that their confessions had been obtained by means of torture and that they were subjected to torture and other ill-treatment, including beatings and electric shocks.

Morteza Omidbiglou has written a letter describing how he was detained and interrogated with threats, torture, and beatings. Officers have threatened him that his wife will be raped and abused if he does not comply with their demands. Omidbiglou also stated that in the detention center, officers broke his teeth and beat him. He was also tortured and beaten for a week.

Abolfazl Karimi, a teenager arrested during the November 2019 protests, is serving a 27-month sentence at the Great Tehran Penitentiary. Aborfazl Karimi was born on November 27, 2001. He was under 18 years of age at the time of arrest. The young detainee described his situation by saying, “One of the agents kicked me in the face and I fell. Another one of them kicked me in the stomach and used vulgar language. Another agent hit me on the head with his gun and my head broke and started bleeding. They put a bag over my head and forced me into a car. Around thirty minutes later we reached the IRGC Intelligence Department in my neighborhood in Akbar Abad…

“I was interrogated for two days in Evin. They said if you do not speak we will bring your mother here. Then they said they would bring my girlfriend and rape her. I cried. I was mentally tortured. I was in the solitary confinement of Ward 2A of the IRGC for about 50 days. After that, I was in the general ward for 15 days. During all this time, I was able to contact my family only once.”

Hossein Reyhani was denied access to a lawyer for months after his arrest and had no information about his case. He has been repeatedly subjected to physical torture, including beatings with hose on the back and sides, limbs, and to solitary confinement and mental torture. He is at risk of execution in prison.

Iran Human Rights Monitor calls on the international community, and in particular human rights organizations, to strongly condemn the killing and execution of protesters by the Iranian regime. The UN Security Council must place the dire human rights situation in Iran on its agenda and send an international delegation to visit the prisons in Iran. They must meet with the prisoners, especially those arrested during the November 2019 uprising.