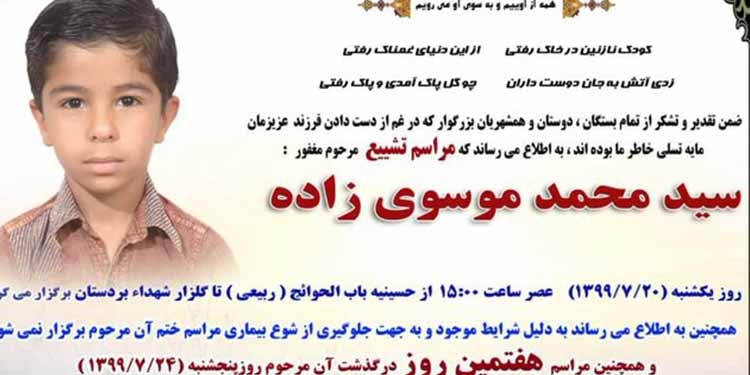 A poster announcing a memorial ceremony for Mohammad Moussavizadeh, who hanged himself in Bushehr, because his parents could not afford a smartphone for him to take part in online classes during the CIVID19 crisis.

Rampant spread of poverty in Iran is creating tragic consequences in society. Children as young as 10 commit suicide for being deprived of their basic needs. Poverty and hunger drive parents to commit mass suicide along with their children to escape the pain of living under the rule of a corrupt and oppressive regime.

An 11-year old student took his own life because he did not have a cellphone to attend online classes.

Mohammad Moussavizadeh who lived in Deyr County in southern Bushehr Province, hanged himself on Sunday, October 11, 2020.

The Department of Education of Deyr issued a statement denying that the reason for Mohammad’s suicide was his lack of access to a cellphone and being deprived of virtual classes. His mother, however, insisted, “Mohammad committed suicide because he did not have a cellphone. The Education Department lies. Sometime ago, the school principal promised Mohammad and two other students to give them cellphones, but he did not deliver on his promise. This is why Mohammad killed himself.”

His father said: “The school had announced that they would buy tablets for all students. But we did not receive any cellphones or tablets from the school. I receive pension from the Welfare (Organization) and don’t have a good financial situation. My son had only one cellphone which I had bought him. He did his homework with it. Just recently, the phone broke down and he asked me to buy him a new one.”

The state-run ROKNA news agency reported on Monday, October 12, that a 10-year-old boy by the name of Morteza had hanged himself and died. He lived in a village in Ilam Province, western Iran. The master of the village said Morteza’s family were poor and had a difficult living.

Another report said of the suicide of an Afghan girl, only 10 years of age. She lived in Hajiabad neighborhood, in Tehran’s Aminabad district. She also hanged herself and died.

In another shocking news, a woman was hanged on October 11, 2020, in the Central Prison of Mashhad. The impoverished single head of household had suffocated her two children four years ago, after she failed to feed and provide for them. Her suicide attempt failed and she was imprisoned on death row. The death penalty for Razieh, 37, was carried out on Monday, October 12.

Mothers committing suicide along with their own children is one of the most shocking consequences of poverty and hunger in Iran.