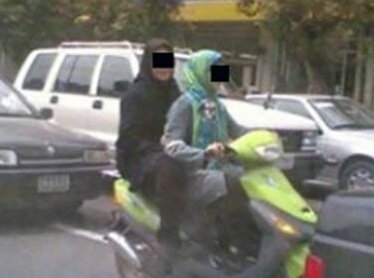 “In absence of State Security Forces, two ‘norm breaking girls’ exploited the opportunity in Boostan Jangali (a natural park) and committed an action against revolutionary norms and values by riding a motorcycle,” stated Colonel Ali Elhami, the commander of city of Dezful State Security Force, on Wednesday January 11.

Elhami described the motor biking of the two girls and dissemination of their photos in cyber space as an obscene and despicable act and said: “this manifested the utmost denunciation of religious norms by the two girls and caused serious torment and anxiety among city officials.”

“The State Security Force carried out an extensive investigation and finally managed to find, arrest, and deliver them to judiciary officials,” Elhami added.

Iran: Imprisoned woman gets her demand