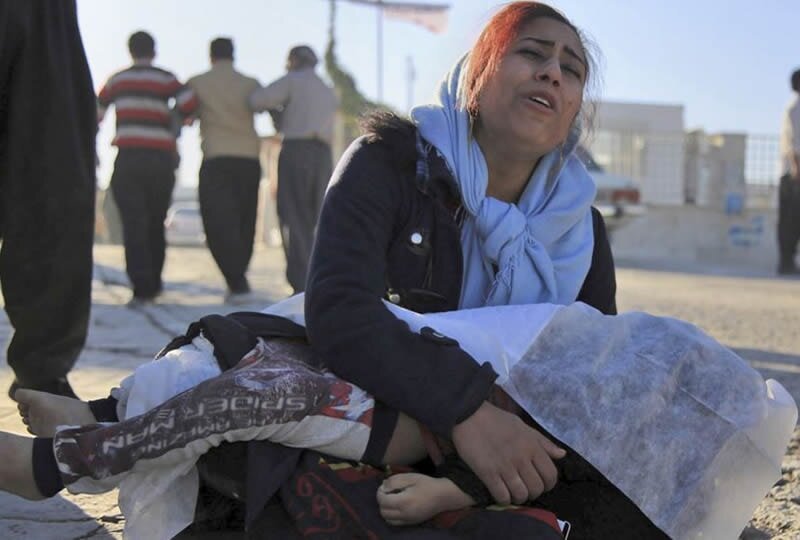 A magnitude 7.3 earthquake shook western Iran on Sunday November 12. This has been the deadliest quake in the world this year. The majority of victims were Iranian. “More than 1,000 people have lost their lives,” Iranian MP Ahmad Safari said to the state-run ILNA news agency 72 hours after the quake.
“I went to a village where they said they pulled 20 corpses from under the rubble. They were not even counted in the death toll. 70 people died just in one alley of the town of Sarpol-e Zahab. Another 250 were killed in the Mehr housing complex.”
While the incoming statistics of this recent quake are devastating, the ruling regime failed to provide any first aid relief.
“There are still people stranded in villages where 90 percent of the homes are left destroyed. No official has visited these areas. The locals, along with their children, are forced to sleep the nights in their farm fields without any shelter,” a reported wired by the semi-official ISNA news agency reads.
Preventing quake damage is nothing out of the ordinary or impossible. A truly popular government allocating the necessary manpower, means and budget can do the job.
In similar conditions in other countries, the governments usually mobilize all their resources to aid those afflicted. Iran’s regime however imposed martial law in Sarpol-e Zahab, the epicenter of the earthquake, instead of focusing measures to rush aid for the victims.
Days after the disaster and following various reports on inaction of the Iranian regime’s authorities to address the earthquake, government media reflected a corner of the catastrophic situation of people in the quake-stricken areas.
Ahmad Safari, the representative of Kermanshah in the Iranian regime’s parliament, said in an interview with state-run ILNA news agency on Wednesday, November 15, that “some villages have not received any help.” He also said: “Here is the resurrection, and the root of the problems is the lack of crisis management.”
“It’s possible that only 10% of the villages will be tent,” said the regime’s MP, who visited the quake-stricken area on Wednesday. “There are areas where 90% of the villages are destroyed; the situation is very dire.”
Ahmad Safari also criticized the regime’s broadcasting (IRIB – Radio & Television) coverage of the earthquake, saying: “The IRIB provides coverage (of the earthquake) in a way as if everything is alright and in place. The national media with their ineffective news coverage oppressed and betrayed Kermanshah.”
He also said the number of deaths is much higher than official statistics. “The authorities do not know, I myself went to a village where they said they buried 20 people on the first day,” Safari told state-run ILNA news agency after visiting a quake-stricken area. “These people are not included in the death toll. In my opinion, more than 1,000 people were killed; seventy people were killed only in an alley in Sarpol Zahab; more than 250 people died in in the Mehr housing units.”
Qassem Jassemi, another regime’s representative in the parliament, also said: “Drinking water, food and basic and general supplies have not yet reached the (quake-stricken) families.”
He added that relief efforts are very slow and people are faced with the problem of shelter and housing and have spent the last three nights outside in the cold.
According to the regime’s MP, the electricity and water problems are also present in the quake-stricken areas.
The state-run Sharq daily wrote on November 15: “72 hours after the devastating earthquake in Kermanshah, people are still stunned by the helpless relief efforts; many still continue to spend the night out without a tent.”
This government media added: “People are complaining about the way help is provided, and many have not yet received a tent. Almost all people sleep in the street. 700 households in the village of Kani are in a very bad condition without even one relief worker.”
“We cried from the very first day of the incident (earthquake) to bring us only tents and blankets so that our women and children do not die from the cold, but no one listened to us. The villagers endure all the hardships, but the cold hangs everyone, especially the kids and the elderly. We survived the earthquake and we hope not to die from cold,” the state-run Javan newspaper wrote quoting a quake survivor.
The state media added: “Two days after the deadly earthquake, there is still no news of relief and assistance to the villagers. The villagers, who do not have any shelter, spend the night in the cold under zero degrees outside, without tents and blankets and heating equipment.”

Iran Human Rights Monitor has registered 44 executions in November, only three of which have been announced by the state media and one was carried out in public.
The executions were carried out in the cities of Urmia, Ardebil, Ilam, Taybad, Bandar-e-Abbas, Tabriz, Mashhad and Karaj.
Two Afghan national juvenile offenders detained in Zahedan Prison, were sentenced to death based on drug related charges. They told that they were tortured to confess the alleged crime and now face death sentences.
Political prisoners Saber Sheikh Abdollah and Diako Rasoulzadeh stood trial for the second time and re-sentenced to death.

Iran human rights monitor recorded 4 arbitrary murders.
On November 5, the SSF Coast Guards targeted two young men riding on a boat in the city of Minab in Hormozgan Province (southern Iran), killing one and injuring the other. The victim is identified as Sohrab Malahi and the latter is identified as Mohammad Malahi. The two young were not carrying any goods and they were just passing, according to credible sources.
The SSF Border Guards, on November 6, 2017, tortured a 13-year-old porter to death in a village in Khoy, East Azerbaijan Province. The teen porter identified as Rasoul Yousefi was arrested for carrying 20 liters of gasoline.
A poor porter identified as Nezhad Mohammadi who had been recently shot by the Border Guards in Baneh, Iranian Kurdistan, lost his life on November 12.

According to reports obtained by Iran Human Rights Monitor at least six lashing sentences were issued and two were carried out in public. Three hand amputation sentences were also issued in November.
The Jiroft Deputy Police Chief said that the lashing sentence for three robbers was carried out in public in the town of Jiroft, according to the state-run Young Journalists Club Website.
“Two of the (men) were sentenced to 74 lashes while the other man was sentenced to 30 lashes in addition to imprisonment. The lashings were carried out this morning in public”, Reza Mohammad Rezaie said.
A young man, accused of robbery, stood trial while a number of complainants requested hand amputation for him. He has been identified as 34-year-old Shahram, according to the state-run ROKNA news agency, November 13, 2017.
“Do not amputate my hand. I have a young daughter and my elderly mother is suffering from cancer. I stole because of (financial) pressures”, Shahram said in response to his charges.
At the end of the session, the Judiciary Committee met to issue a verdict.
In another development a man accused of stealing in one of the villages in the town of Talesh was lashed in public. No information has yet been obtained on the identity of this person, but he was accused of stealing rice, according to Nafas Dar Ghafas Website, November 23, 2017.
A prisoner in Ardabil Prison who is in temporary custody was chained to a pole in the quarantine section of this prison by authorities from ten days ago. He has been identified as Afshin Valipour. According to an informed source, the quarantine section is a covered area which has poles all around it. Prisoners are tied to the poles as punishment. Prisoners call this area, “under the bridge.”

A prisoner identified as 43-year-old Hussein Aflatouni, who was detained in the Greater Tehran Prison died as a result of not getting necessary medical attention.
The prisoner, who suffered from diabetes, had lost his eyesight from some time ago. Prison officials did not take any measures to address his condition which led to his deteriorating health and he eventually came down with tuberculosis. The severity of his illness and the deterioration of his physical condition was to the extent that he could not walk or do anything on his own.
Prison authorities eventually transferred him to a hospital outside the prison due to protests from his cellmates. However, it was too late and the prisoner died on November 16, due to the severity of his condition.
Five Baluch citizens, who were arrested four months ago, were subjected to torture to make forced confessions. These men who were arrested by the Ministry of Intelligence in Iranshahr on July 8, have been identified as Mohammad Saleh Shahdad Zehi, Mahmoud Shahli Bar, Idris Rokni, Abdolaziz Rokni and Hashem Zardukouhi. According to an informed source, they were arrested after a Bassij agent (the regime’s paramilitary force) was killed in the town of Sarbaz.
“They are still under torture at the Zahedan Ministry of Intelligence Detention Center”, the source added. According to the source, the agents pulled out three of Idris Rokni’s fingernails. Majid Asadi, a political prisoner and civil activist who has been detained in an uncertain condition in Rajaii-shahr Prison in Karaj, currently has denied medical treatment in a hospital outside the prison. After a 40-day hunger strike he suffers from digestive problems. Majid Asadi stood trial on November 5 despite his critical health condition.
Political prisoner Soheil Arabi was transferred to Section One in Evin Prion as a punishment on November 21 after he got in a verbal fight and protested prison conditions. Section One is the quarantine section and lacks normal prison facilities. Prisoners who are transferred to this section are deprived of making phone calls to their families.
On Friday, November 24, political prisoner Mohammad Nazari, who is detained in Orumieh Prison and is known as the oldest political prisoner, went on a hunger strike again in protest to “lack of medical treatment.” After examining him, prison doctors stated that he should be urgently admitted to hospital for surgery because of kidney disease.
However, despite the advice of doctors, prison authorities have not taken any measures to hospitalize him for surgery.
Doctors who are in charge of a detained Kurd labor activist’s health, have in a letter, cautioned about his critical health and have requested that he be urgently brought to the hospital. Mahmoud Salehi is suffering from various heart conditions. His family’s efforts to convince security and judicial officials to send him to the hospital have been in vain. Mahmoud Salehi has been sentenced to prison on charges of membership in anti-regime organizations and spreading propaganda against the regime.

Suppression of religious and ethnic minorities

Three young Baha’is, were sentenced each to five years behind bars for following up on their cases of being deprived of higher education.

Rouhieh Safajoo, Tara Houshmand, 21 and Sarmad Shadabi, 22, were denied higher education after passing the admission tests. They were arrested in March 2016 for legally following up their cases and publishing their issue in the social media. The three were released on bail a month later in April 2016.
After repeated summoning and trials they were tried on September 26, 2017, and in November 2017, were informed that they had been given 5-year sentences each for “acting against national security by adhering to the Baha’i faith.” They were denied access to legal representation in all due process.
After five months there is no information on where Abdollah Chaldawi, an Arab civil activist is imprisoned. the intelligence agents arrested Chaldawi on August 27 and took him to an unknown location. It is not clear for what reason he was arrested.

A street vendor has been left with “serious injuries” after reportedly being attacked with a cudgel by the municipality agents in Miandoab, northwest Iran. The victim was hit so hard in his head that he fell in the street. The agents confiscated his cart and the fruits he was selling in the street.