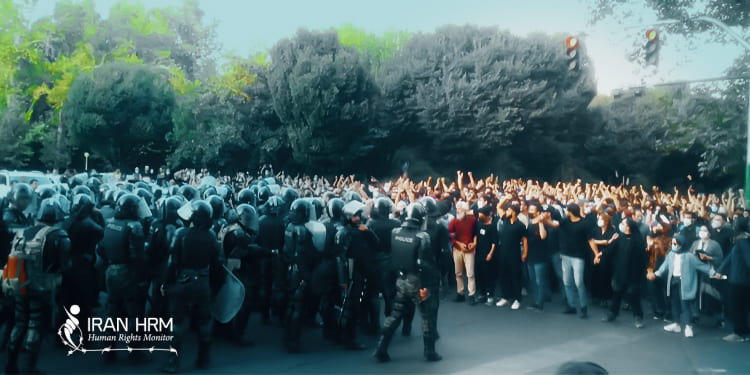 Popular protests in Iran continued throughout the month of October. Unfortunately, in every protest the state security forces responded with severe violence. The amount of violence used against protesters has left thousands injured. The number of deaths is estimated at 450 so far.

Some of the most significant events in October included killing protesters by beating on their heads; the attack on Evin Prison, killing of dozens of prisoners and relocating hundreds of prisoners to other jails; the attack on Tehran’s Sharif University and rounding up at least 60 students; repeated crackdowns on worshipers in Zahedan; attacking dozens of universities and student dormitories in Tehran and other cities and abducting dozens of student activists; attacking girls’ high schools and arresting high school students; suspicious conditions of shooting pilgrims in Shahcheraq Shrine in Shiraz, etc.

After ten days of desperate pleas by her family in Tehran, Nika Shakarami’s lifeless body was handed over to the family with a broken skull and a crushed nose.
Nika’s aunt explained that she went missing at the rally in Keshavarz Boulevard in Tehran on September 20, 2022. They received her body on the morning of September 30, 2022.
Nika’s mobile phone was available until 7 o’clock and then turned off. In the last call, she tells her friend that I am running away from security forces.
Nika is not the only teenager under the age of 18 who has been killed. More than 37 minors have been killed by the Iranian security forces during the recent protests.
Asra Panahi, a 15-year-old high school girl, was also beaten to death by plainclothes agents during an attack on the Shahed High School in Ardabil on October 18, 2022. Similar attacks were also conducted on several other schools in various cities with students arrested and abducted.

Though the freedom of assembly is a fundamental human rights, the Iranian authorities continue to block their people from this need. For over 45 days the Iranian authorities have continued to threaten the protesting people.
The head of Iran’s Revolutionary Guards Corps (IRGC) Hossein Salami warned protesters on October 30, 2022, that this day would be their last day of taking to the streets. Indicating that security forces may intensify their already fierce crackdown on widespread unrest.
On October 26, an armed man filmed by CCTV cameras went on a shooting spree in Shah Cheragh Holy Shrine in Shiraz, killing 13 pilgrims, and injuring 40. Officials claimed the attack had been carried out by Daesh (ISIS) but the circumstances surrounding this incident are extremely suspicious.

Wards 7 and 8 of Evin Prison were under heavy fire and gunshots on October 15, 2022. Iran’s Special Force (NOPO), guarding the Supreme Leader, started an attack on numerous political prisoners. The state forces used live ammunition and shotguns on the prisoners late in the evening. Many of them were shot by pellet guns and restricted from medical care that would have allowed removal of the metal objects from their body.
Tear gas was fired at closed wards attempting to suffocate prisoners.
The courtyard of building No. 8 was covered in blood and prisoners were seen thrown down from the roof by the NOPO forces.
The forces lay prisoners down on the ground in the yard and beat them so hard that some prisoners almost reached the point of death.
One eyewitness confirmed the beatings to have continued until morning.
People from nearby neighborhoods and the prisoners’ families quickly rushed to reach Evin Prison, but the roads were blocked by authorities. Prisoners were not given food in the following days.
The authorities used ambulances to relocate prisoners. Later, it became clear that they had been transferred to the prisons in Karaj and elsewhere.

Hundreds of citizens were arrested in the cities of Kurdistan Province. They were transferred to the Ministry of Intelligence’s Detention and Sanandaj’s Central Prison. Transferring this high number of arrestees has caused a dense population creating a problematic situation.
There is a severe lack of space, reduction in food rations, lack of necessary sanitary facilities and even shortage of supplies in the prison store. These issues caused the prisoners to strike on October 1, 2022. The prisoners’ demand to receive decent needs led to an intense clash with the prison security unit and prisoners were severe beaten.
Before hundreds of prisoners being transferred to this location, the number of inmates was 650. It has now gone beyond a thousand whereas the capacity of this prison is only 400 prisoners.

Protests by students at North Tehran Azad University, was met with brutal repression of uniformed forces on October 30, 2022. One of the plainclothes privates aimed his gun at the students and fired tear gas at them on the campus.
Students’ dormitories in Ahvaz and Sanandaj were attacked in the middle of night on Friday October 28, 2022. The state assaults and shootings repeated the morning on Saturday, October 29, 2022.
The repressive forces kidnapped and injured many of the students who were resting as well as firing tear gas in the university’s premises.

Another bloody attack on Zahedan’s worshipers

On October 28, 2022, once more the state security forces opened fire on the peaceful protest march of locals who had attended Friday prayer ceremonies in Zahedan.
Protesters angry by the killing of more than 117 locals in an earlier event took to the streets. Their protest saw yet again, 12 civilians shot and killed by state forces, including minors.