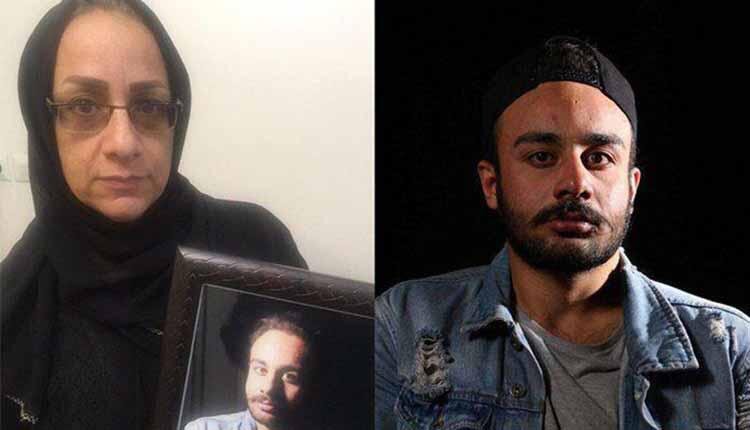 Mother of Sina Ghanbari, a 23-year-old man who suspiciously died in the “quarantine” ward of Evin prison in January 2018, says her son was murdered in prison.

Regretting her one-year silence Fatemeh Malayan Nejad said: “My son did not commit suicide, he was beaten in prison. when I took my son’s body, they did not allow me to speak, but I would have spoken, I was to prove Sina’s innocence so that I can finally find peace in my heart.”

“Sina was planning for his birthday, and it is not possible that a young man with such a spirit would commit suicide,” she said.

“Six days after Sina’s arrest, just on his 22th birthday, an officer called me and said that your child had committed suicide. My son had planned his birthday a month earlier, how could he take his own life on his birthday?” she added.

Mrs. Malayan Nejad explained that during his arrest Sina had twice contacted her saying he was beaten. She emphasized that over the last year she had not believed that his son had committed suicide.

Sina Ghanbari, 23, died in January 2018, in Tehran’s Evin prison, the country’s most notorious jail.
There was conflicting reports about the circumstances surrounding Ghanbari’s death, with activists disputing the authorities’ claims that he had committed suicide.

Sina Ghanbari was arrested by the state security forces during the December 2017/ January 2018 Iran protests.

The state-run Fars news agency, run by the Islamic Revolutionary Guard Corps (IRGC), published a letter it claimed had been written by Ghanbari’s family in which they said they had no plans to hold a funeral ceremony because “enemies” were planning to hijack it. It was not possible to independently verify whether the letter was written by Ghanbari’s family or, if so, whether they wrote it voluntarily.

In May 2018, Sina Ghanbari’s mother said that when they were putting Sina in the grave, and while surrounded by security agents, she had uncovered his head and saw signs of broken skull and smashed left eye.

Iran has a history of resorting to forced confessions, a familiar pattern used against prisoners of conscience and their associates.

At least two others who were arrested during the crackdown on protests – Vahid Heydari and Mohsen Adeli – died in custody in Arak, Markazi province and Dezfoul, Khuzestan province. Activists and several family members have disputed official claims that these detainees committed suicide.

Mahmoud Sadeghi, an outspoken MP said inn January 2018 that an Iranian protester who died in custody was forced to take pills that made him sick. The MP did not reveal the identity of the prisoner.

“According to the relatives of one of the detainees who died in jail, he had told his family during a phone conversation [prior to his death] that the authorities had forced him and other prisoners to take pills that made them sick,” Sadeghi tweeted.

Members of Persecuted Baha’i Faith Arrested And Deprived From Education