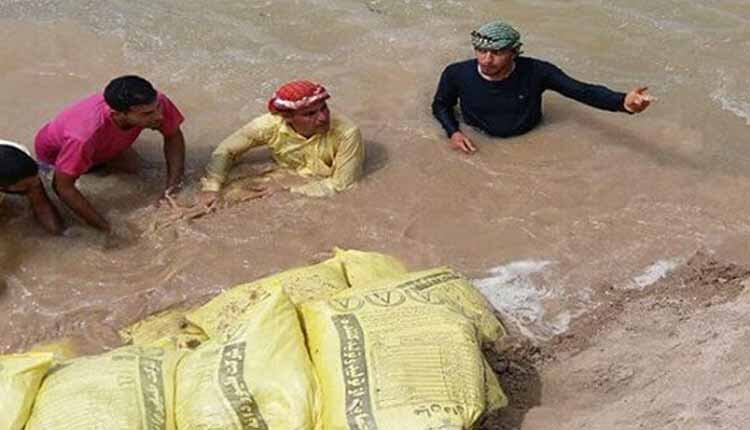 With no state aid in sight, these young men in Khuzestan, southwest Iran, are doing whatever they can to protect their homes and farms from advancing floodwaters.

Iran’s security forces arrested two residents of a village in the southwestern province of Khuzestan for providing aid to the flood survivors.

The two, who were taken to an unknown location, have been identified as Ahmad and Yaghoub Ka’bi, residents of Guorieh Village.

Ahmad Ka’bi and Yaghoub Ka’bi were working with an aid group in flood stricken areas. It is not clear why they were arrested.

This comes after floods ravaged the north, south and west of Iran with angry Iranians complaining that the regime was not providing adequate relief to the victims.

With heavy rains drenching much of the country since March 19, floods have swept through hundreds of towns and villages in 28 of Iran’s 31 provinces, killing at least 290 people.

Thousands of people have been sheltering for days in the open with little food or warm clothes as the rains have continued.

With no sign of government aid, people in flood-hit areas have dared intense storm conditions and desperately attempted to prevent floodwaters from ruining their farms and homes.

There are many reports indicating that Iranians are complaining of not receiving any adequate aid from the government.
At the same time, the state TV is reporting the government has sent forces to help the flood-hit locals.

In yet another case, a resident of Marvaneh Village in the southwestern province of Khuzestan was arrested on April 6, by Iran’s security forces for protesting the regime’s lack of aid to his village and for preventing security forces from breaking the villagers’ flood barriers.

The man, who was taken to an unknown location, has been identified as Khalaf Mardani, a Sheikh and village elder of Marvaneh.

There have been reports that security forces and Islamic Revolutionary Guards Corps forces attacked angry locals in Khuzestan and the western province of Lorestan.

Although the IRGC denied reports of scuffles with locals in Jelizi Village in Khuzestan’s Dasht-e Azadegan, reports indicate that a man identified as Aboud Jalizi died after the IRGC opened fire on locals protesting the explosion of their flood barriers by the IRGC which directed water to their village and farmlands.

The father of six died due to the severity of his wounds in a hospital in the southwestern city of Ahvaz on Thursday.

Reports indicate that the farmlands, which have now been engulfed by water after the IRGC blew up the barriers, were the villagers only source of income.