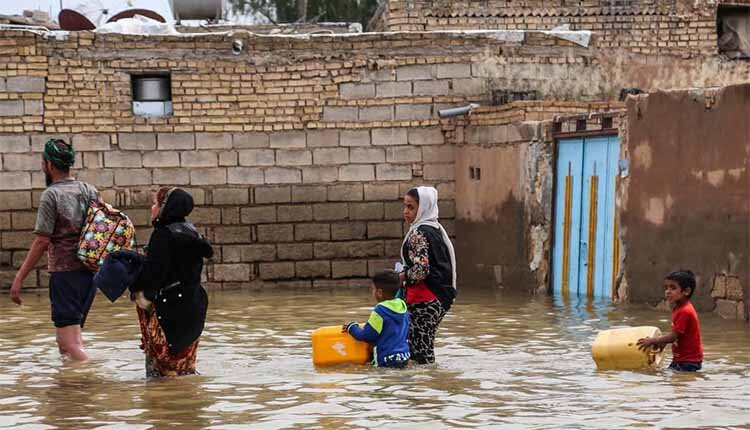 The head of the Cyber Police in Khuzestan said that 24 internet activists were identified and detained for reporting on the devastating floods in the southwestern province, according to the judiciary’s news agency Mizan Online.

“Due to the publication of rumors and fake news on the internet which has led to insecurity in the community’s psychological climate, experts of the police forces monitored social platforms and identified 24 internet users who published deviating news and rumors about the flood and disturbed public opinion,” Colonel Shahin Hassanvand said adding that they were handed over to the Judiciary.

Last week, Tehran’s Chief of Police announced that four people had been arrested in the capital for “spreading rumors” about the incompetence of officials in flood relief efforts.
The regime views local news which show the scope of devastation and the government’s incompetence in dealing with the floods as a threat to its security.

Iranian authorities have warned citizens that they could be prosecuted for their online postings about the flooding that has resulted in dozens of deaths and destroyed homes and infrastructure in several provinces throughout the country.

The starkest warning was issued by the state’s cyber police force, referred to by the acronym of FATA, on March 27, 2019.

“All police units in the provinces have been instructed to monitor social media and take swift action against those who publish images and spread rumors that disturb public opinion and disrupt the peace in society,” said Ramin Pashaie, FATA’s deputy chief, on March 27.

Pashaie also accused those who have shared photos and video footage of the damage, particularly from the hardest-hit city of Shiraz, Fars Province, of doing so for personal gain.

“We ask our dear citizens to not pay attention to news from unknown sources on social media because many of these individuals want to take advantage of the recent floods in order to increase their audience and followers,” he said.

In late March, Iran’s Attorney General said that publishing “fake” news on the floods was a security violation adding that those who published such news would dealt with as “disrupting the security of the country”.

According to human rights groups, 11 relief workers were also arrested in Khuzestan in the past few days by the Islamic Revolutionary Guards Corps.

In a recent case, residents of Selang Abad and Eyn-e Do districts in Ahvaz, capital of Khuzestan Province, southwest Iran, took to the streets protesting the authorities’ inaction and refusal to provide any relief to the needy people in flood-hit areas.

Local reports and videos on social media indicate that the regime has dispatched various units to quell protests in the province.

Videos on social media showed troops from Iraq’s IRGC backed Popular Mobilization Forces in Khuzestan while the Fatemiyoun Division, made up of Afghan nationals, were sent to Poldokhtar in western Iran. The Fatemiyoun has been designated as a terrorist organization by the US Treasury. Locals believe that these forces have been sent to quell protests.